The FIA World Rally Championship added a “Qualifying Stage” for this weekend‘s rally in Sweden and the fastest time was taken by Ford’s Jari-Matti Latvala. A good start for the Finn because he earned the prize which allows him to decide his start position for the first stage on Friday. This new approach to stage rallies will been seen on all loose surface events for the season.

The inaugural qualifying special stage was 3.99 km near Hagfors and it was very icy. Latvala took the Rally Sweden victory in 2008 and after a dismal start of the 2012 season; he aims for a definite podium finish. The Finn was faster than another Finnish driver as his former team mate came in second. Mikko Hirvonen, now racing for the Citroen factory team just missed the top spot by 0.5 seconds. 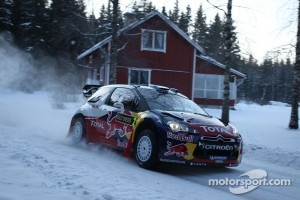 “I had no problem in the stage at all,” said Latvala. “Maybe on one corner I was a little bit slower after I saw some rocks and went around them, but otherwise it was the perfect time for me. I am happy with the time I set and the position I am in, but certainly there is a lot to be thinking about before we decide what place we take. We have to think about the weather and a few other factors: it’s not so straightforward.”

Ott Tänak scored third in the Go Fast Energy Ford Fiesta normally driven by Matthew Wilson, who was forced to sit out the event due to an injured ankle. The result for Tänak was surprising, this is only the Estonian's third WRC event in the top class. Evgeny Novikov and Petter Solberg rounded out the top five. Points leader Sebastien Loeb could do no better than sixth, but still has a chance of a better road position than being first on the road.

With the results in hand Latvala was first to pick his road position and curiously the Finn decided 17th out on the stage was the ideal number. Hirvonen followed suit with 18th while Tänak decided 14th would be the best starting spot.

The new order was put to the test later in the day, when the drivers tackled the Super Special Stage in Karlstad as stage 1 of the rally. Latvala was slow off the start line and suffered because of it. The man who just earned the best start position could only manage sixth place in the result. The stage win went to Dani Sordo in his works Mini Cooper, just edging out Mads Østberg by three tenths.

We are happy now but it was just a short stage and tomorrow is going to be a long day.

"The stage was really, really nice," he said. "We are happy now but it was just a short stage and tomorrow is going to be a long day." said Sordo.

Ott Tänak was once again third fastest and has started his really in great form for his first podium finish. Yet there are a lot of kilometers between him and that goal. For now the challenge of the super special was not to make any costly mistakes, For me, that stage was like a Mickey Mouse stage. The aim was to make it through without any problems and then the real competition starts tomorrow."

Loeb was once again just on the edge of the leaders and tied Solberg for fourth place on the timesheet while Hirvonen followed up in sixth place.

Tomorrow will be a treat for Solberg when the route takes him into his homeland, Norway. In fact, the stages hit so close to home that the route will take him right past a property the Ford driver owns! "That was a fantastic start," smiled Solberg. "I am really, really pleased with that! I'm very excited for the rally moving to Norway tomorrow. It's going to be an amazing atmosphere with my home fans!"

For the rest of the driver's tomorrow will be a long challenge in truicky conditions. The starting order decided in the qualifying shakedown will remain unchanged for the day's stages.