Ford World Rally Team drivers Jari-Matti Latvala and Miikka Anttila maintained their grip on second place in Rallye de France today. During one of the longest day’s competition of the FIA World Rally Championship season, they won three speed tests in a Ford Fiesta RS World Rally Car to strengthen their position with one day remaining. 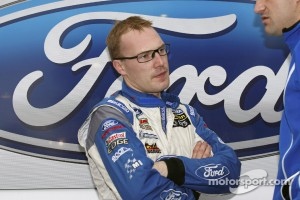 Team-mates Petter Solberg and Chris Patterson retired in the opening stage after a spectacular accident which felled a telegraph pole. There were no injuries and while the damage to their Fiesta RS WRC prevented them from continuing, they will return tomorrow under Rally 2 regulations.

This second leg of the 11th round of the championship offered a massive 192.80km of competition, contained within two identical loops of four stages. After leaving the rally base in Strasbourg, drivers journeyed south-west for asphalt tests through vineyards and the northern Vosges mountains. Conditions were dry and Michelin’s hard compound tyres were the natural option throughout.

Latvala restarted 13.1sec behind Sébastien Loeb but the 27-year-old Finn dropped 10sec after sliding into a ditch early in the second and longest stage of the event, the 43.45km Pays d’Ormont.

“It was disappointing to lose time but I knew that long stage was important,” said Latvala. “I knew if I put Loeb under pressure there, I might have a chance of catching him.

“The stage was dry and open at the start, but after 6km the road went into a forest and became damp. After a fast narrow section I braked, but the brakes locked and my speed was too much for the next slow right corner. I tried to turn in but went off the road into a bank. I restarted but there was a lot of mud in the front left wheel, and the vibration affected the braking for the rest of the stage,” he said.

Latvala bounced back to win the ultra-fast 24.04km Pays de la Haute Bruche at a remarkable average speed of 128.60kph. The final stage of the morning loop was cancelled for safety reasons due to the large number of spectators in the test, so Latvala returned to service in Strasbourg 30.0sec behind Loeb and 19.0sec clear of Mikko Hirvonen in third.

Latvala was fastest overall through the four repeated afternoon stages, tying for fastest time in the first and winning the last. He returned to Strasbourg for the final overnight halt 29.7sec behind the Frenchman and 24.3sec ahead of his fellow Finn.

“My speed was good again today, although I’m disappointed I made a mistake this morning,” he said. “Tomorrow’s stages are short so it will be difficult to attack. But I’m thinking more about preserving second than trying to win, which will be almost impossible unless Loeb makes a mistake. My car is fast enough to win the rally, but it’s the driver that has to improve!

“I’m still not confident when there is gravel and dirt on the road from the cuts, but I’m starting to understand how to approach those situations so that’s pleasing,” added Latvala.

Solberg started in fourth and was fastest in the opening split of this morning’s first stage. However, he left the road soon after, his Fiesta RS WRC ploughing through dense vines before hitting a telegraph pole. The impact damaged the steering and suspension at the front right of his car

“I had a clean run from the start of the stage but went off the road at a fast left corner and into the vines,” explained the 37-year-old Norwegian. “I kept my foot on the throttle because I knew the road was coming up again, but I didn’t know exactly where or when. The windscreen was covered with leaves so I couldn’t see properly and the road came up sooner than I thought.

“The car went straight across the stage and into the vines on the other side of the road. I eventually hit a telegraph pole. It was a big hit but I didn’t immediately realise the pole had fallen down. It was only later that I knew it toppled over. I’m disappointed because I had a clean rally up to that point and I was confident of getting third,” he added.

Ford World Rally Team director Malcolm Wilson was encouraged by Latvala’s speed. “He matched the pace of the leader throughout the day, and was comfortable at that speed. Unfortunately he made a mistake early in the longest stage. He paid the price because when you make an error so soon in such a long stage, it’s hard to regain your confidence with so many kilometres to go,” he said.

The final leg is the shortest of the weekend and takes competitors north of Strasbourg. After departing the city at 07.50, competitors face two identical loops of three stages before returning to Strasbourg for the finish ceremony at 15.47. Drivers must cover all 61.54km of competition without the opportunity of service. The opening stage of the afternoon loop, the 17.08km Vignoble de Cleebourg, comprises the Power Stage, with bonus points on offer to the fastest three drivers. The last test of each loop runs through the streets of Haguenau.