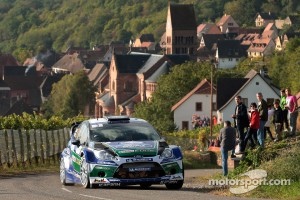 Asphalt roads are Latvala’s least-favoured, but the 27-year-old maintained the pace that carried him to a career-best sealed-surface result in Germany in August, when he was second. “Today was one of my best ever on asphalt,” he said.

This 11th round of the FIA World Rally Championship opened last night with a short speed test in the streets surrounding Strasbourg’s European Parliament. Today the action moved south to the Vosges mountains, near Colmar, where drivers tackled two identical loops of three stages, before ending with a street test in Mulhouse – a total of 146.17km.

Conditions this morning were difficult as yesterday’s heavy rain left damp sections under the trees on the mountain slopes. The moist roads and cool temperatures encouraged both Latvala and Solberg to opt for Michelin’s soft compound tyres for the opening loop. While they were less suited to the mostly dry roads in the opening stage, they were perfect for the next two which were damper.

Latvala was second in Strasbourg last night before claiming third in today’s opening stage. He was second quickest in the next, only 0.8sec from fastest time, before winning the final stage of the morning. He arrived at the 15-minute service break in Colmar in second place.

“I really want to fight for the lead here so it was important to make a strong start and not lose big time this morning,” said Latvala. “Tyre choice wasn’t easy. The first stage was surprisingly dry and my soft tyres started to get too hot near the finish. But the second stage was 80 per cent damp and the last test was 50 per cent damp and they worked perfectly. Soft was the right choice.”

As temperatures climbed to 22°C this afternoon, hard compound tyres were the natural choice. Latvala was fastest in the middle stage of the loop and completed the leg with victory in the final test through the streets of Mulhouse.

“My target was to improve my performance from the last asphalt round in Germany and I did that,” said Latvala. “I was a little inconsistent at times because I lacked confidence in corners where mud had been dragged onto the road by cars cutting. Maybe I was trying to drive too fast and attack too much. Tomorrow’s stages are narrow and bumpier, but I will try to keep the pressure on.”

Solberg was third last night but struggled for confidence in today’s opening two stages. His pace improved on the final stage of the loop but he arrived in Colmar in sixth.

“I didn’t have a good rhythm through the first two stages,” explained the 37-year-old Norwegian. “I wasn’t confident so I drove cautiously as I didn’t want to make a mistake. I made minor changes to the settings before the final stage and everything felt much better.”

More small changes in service further improved his feeling and three second fastest times promoted him to fourth, closing to within 0.7sec of Mikko Hirvonen in third.

“The afternoon was much better,” said Solberg. “Once I had the right feeling then my pace was at the same level as Jari-Matti. It’s a shame that I lost time in the first two stages. Tomorrow I will keep pushing to try to reach the podium and if I can keep the same rhythm as I had this afternoon then that’s achievable.”

Ford World Rally Team director Malcolm Wilson said he wasn’t surprised by the pace shown by his drivers today. “I felt we could come here and put pressure on Sébastien Loeb and I’m pleased we’ve done that,” he said. “Hopefully the conditions tomorrow will be dry and consistent, which is what Jari-Matti likes, and he will keep the pressure on.

“Petter wasn’t totally comfortable this morning but he had a strong afternoon and is within striking distance of the podium,” added Wilson.

Atkinson and Nobre had positive first day in Rally France