Latvala wins for the Finns 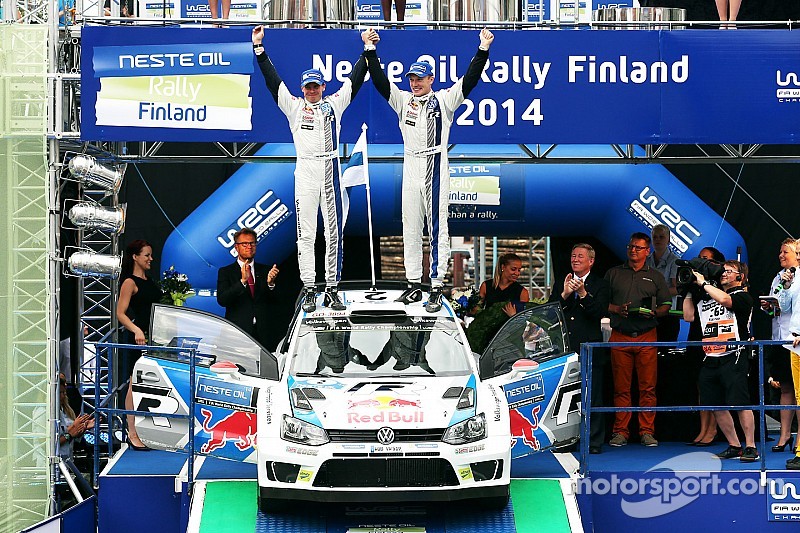 Latvala was able to hang on despite teammate Ogier closing in.

Local heroes Jari-Matti Latvala and Miikka Anttila restored Finnish honours on their home round of the FIA World Rally Championship by taking victory in Neste Oil Rally Finland. After a nail-biting battle that went down to the final stage, the Volkswagen Motorsport crew racked up a win for the Finns on home soil for the first time since 2010. Team-mates Sébastien Ogier and Julien Ingrassia fought to the end and ultimately finished just 3.7 seconds adrift. Kris Meeke and Paul Nagle equalled their best result of the season by claiming third in the Citroën DS3 WRC.

Today’s route was by far the shortest, covering just 36.60 competitive kilometres over three stages, culminating in the Power Stage. After his brake problems of yesterday, Latvala started the day with a slim 3.4 second advantage. He won the first stage and while Ogier took honours in the final two stages - including maximum points for the Power Stage win - Latvala’s determination to claim his third win of the season, and most importantly the home victory, remained steadfast. An utterly dominant performance, in which he led from start to finish, rewarded him with his 11th world rally victory and the honour of flying the flag for Finland. Meeke has put in a fine performance, consistently mixing times with the Volkswagen drivers, to claim his third podium this year.

In the FIA World Rally Championship, Volkswagen drivers continue to control the leaderboard with Ogier, Latvala and Andreas Mikkelsen topping the table. The German marque also heads the Manufacturers’ Championship with a commanding 175 point lead over the Citroën Total Abu Dhabi World Rally Team going into their home round later this month.

Behind the leading trio, Mikkelsen finished a comfortable fourth ahead of Mikko Hirvonen. Juho Hänninen and Elfyn Evans moved two places up the leaderboard when Hayden Paddon was slowed by power steering problems. He ultimately finished eighth after an impressive performance. Craig Breen was the only leading retirement today, the Irish driver forced to withdraw after hurting his back on one of the notorious jumps.

The ninth round of the FIA World Rally Championship takes the contenders to Germany for the first true tarmac round of the series, ADAC Rallye Deutschland (21-24 August).