Armed with a relatively comfortable lead over Sébastien Ogier, Sébastien Loeb could afford the luxury of controlling his pace in the many rough, rock-strewn sections.

Clear leaders going into the final day, Sébastien Loeb and Daniel Elena controlled proceedings from the fro nt to grab their eighth win in Argentina. 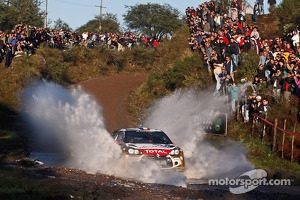 Run without any service period, this third day of racing saw the competitors take on some of Rally Argentina’s most famous stages: Mina Clavero/Giulio Cesare and El Condor/Copina, each run two times. Bonus points were available on the second run on El Condor, which served as the Power Stage.

Equipped with Michelin Latitude Cross soft compound tyres, the Citroën Racing crews left Villa Carlos Paz early this morning, heading west for the stages. Armed with a relatively comfortable lead over Sébastien Ogier, Sébastien Loeb could afford the luxury of controlling his pace in the many rough, rock-strewn sections.

And yet he still managed to increase the gap significantly. Winner by almost a minute, the nine-time World Champion admitted feeling a little emotional about what will undoubtedly be his last win on gravel in the WRC.

“It’s pretty incredible to win Rally Argentina for the eighth time running, in front of so many passionate fans”, he said on his triumphant arrival in Villa Carlos Paz. “Winning wasn‘t essential for me, but I really got into it when I saw that I was on the pace.

Ogier was also quick, but I was a bit more consistent before pulling clear at the end of the second leg. I am pleased to win here for the team; they really deserve it.”

Somewhat isolated in the overall standings, Mikko Hirvonen drove at a strong pace. His performances earned him a bonus point in the Power Stage.

And his sixth place overall enabled the Citroën Total Abu Dhabi World Rally Team to score the same number of points as its main rival in the Manufacturers World Championship: “It was a good day, with some sunshine, lots of fans and some great stages.

I had a lot of fun driving today. My pace was good, the car was perfect and it wasn’t too difficult to set some pleasing times.”

Tenth overall at the start of the day, Dani Sordo was one of the main movers as the rally drew to a close. Despite running second on the road, the Spaniard overtook Andreas Mikkelsen and Martin Prokop on consecutive stages.

However, a gearbox problem for Sordo meant that the Norwegian fought back to retake 8th place by just 2/10ths… “I wasn’t paying too much attention to the times, because I was mainly focussed on getting the car to the finish”, commented the Abu Dhabi Citroën Total WRT driver. “It gave me the chance to keep trying to improve my driving, especially in the slow corners.”

Pleased with this second win of 2013, following the one secured at the Rallye Monte-Carlo, Yves Matton reflected on the overall result of his team. “My overriding sense is that the rally confirmed that the performances of the DS3 WRC have progressed”, emphasized Citroën Racing’s Team Principal.

“We have done a lot of work since Rally Mexico and that work has been repaid with the win. Obviously, an essential part of the win is Seb himself, who was back to his brilliant best despite missing the last few rallies.

But I’d like to mention our other drivers too: after Dani in Portugal, Mikko showed this weekend that he was in contention to win the rally. They both still lack a bit of consistency to turn their good form into results. We’re all going to work towards achieving just that.”