© 2021 Motorsport Network. All rights reserved.
TV Tickets Fashion Giorgio Piola Jobs
Previous / Volkswagen leads in Argentina – Ogier ahead of Loeb Next / A rally of endurance and a rally of hardship for Qatar M-Sport
WRC Leg report

Sébastien Loeb and Daniel Elena are 16.3s adrift of the leaders, 1.8s ahead of their team-mates Mikko Hirvonen and Jarmo Lehtinen.

Challenging for the lead right from the word go, the Citroën Total Abu Dhabi World Rally Team crews ended day one of Rally Argentina in second and third position.

After kicking off on Wednesday evening with the Villa Carlos Paz super special stage, Rally Argentina got down to serious business today. The route took the competitors around a hundred kilometres north of Cordoba. The two runs on the Santa Catalina/La Pampa (27.09km) and Ascochinga/Agua de Oro (51.88km) stages provided the crews with the first significant test on a rally that combines speed and endurance. 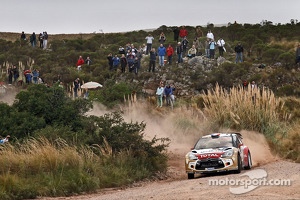 With large damp sections, misty rain and fog all expected during the morning loop, tyre choice was quickly settled: the Citroën DS3 WRCs left the service park with soft Michelin Latitude Cross tyres. It wasn’t until the cars reached the end of the Agua de Oro stage that the performances of the various crews over the 79km of timed sections could be judged. After winning SS3, Mikko Hirvonen held second place, 3.6s behind Sébastien Ogier.

“It went really well, although we were struggling a little bit with the tyres towards the end of the stage. This was the decisive factor for performance this morning,” stated the Finn. “I think I can go a bit quicker. We just have to try to be more clean, to stop the car from sliding around and improve the traction.”

Admitting that he was a little rusty after missing the last two rallies, Sébastien Loeb didn’t take long to work out how to get the best out of the DS3 WRC. The nine-time World Champion reached the mid-day service 6s behind the leader: “I had a bit of difficulty on SS2; it took me a while to understand how I needed to adjust my driving style. The set-up that we used this morning was creating understeer, something I’m not that used to. We are going to go back to a set-up that will be more natural for me. The outcome of the morning is still positive as I’m not far behind Mikko, who has always been very quick here.” 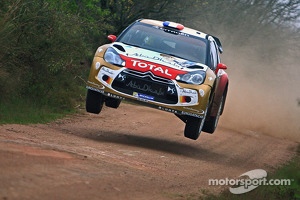 The first run on Ascochinga was a lot trickier for Dani Sordo and Carlos del Barrio, who rolled their car just after the half-way point of the stage. “I wasn‘t comfortable on SS2, which I thought was very slippery. But it was much better on the next stage,” reported Dani. “Unfortunately, there was a problem with Carlos’ door. It affected his concentration and he didn’t give me the right pace note. It’s really disappointing, but that’s life. We are still in the rally and we will keep going to try and secure the best possible result.” After extensive mechanical repairs, the Abu Dhabi Citroën Total WRT’s DS3 WRC was able to continue and the Spanish crew ended the day in 10th position.

Meanwhile, Mikko Hirvonen and Sébastien Loeb had to cope with hard tyres, which turned out to be ill-suited to the road conditions. Seb fared better than Mikko, from whom he pinched second place: “The car drove well and we thought we had gone for the right option with the hard tyres. But then we had some drizzle and so we just tried to lose as little time as possible. We lost about ten seconds to Ogier, which isn’t very much and yet, it could be crucial. We’ll just have to deal with it on the last two legs…”

“I would say it has been a positive day, much more so than on the last two rallies”, commented Mikko. “We’re still there. Tomorrow is going to be a tricky day, especially if it continues to rain. Everything is still possible.”

Volkswagen leads in Argentina – Ogier ahead of Loeb