Loeb bows out in style in 2012 Rally de Espana finale

Sebastien Loeb marked his final outing as a full-time driver in the FIA World Rally Championship with the 76th victory of his career on RallyRACC-Rally de Espana, which finished in Salou this afternoon following three days of thrilling competition.

After struggling for pace through Friday’s rain-hit, mainly gravel tests, Loeb moved in front on the asphalt of day two and remained at the head of the field thereafter in his Citroen Total World Rally Team DS3 WRC.

The win, shared with co-driver Daniel Elena, was their eighth in Spain and the 250th in the WRC for tyre partner Michelin. 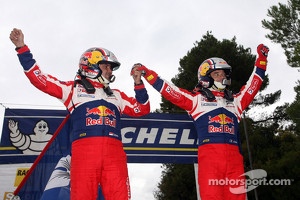 Jari-Matti Latvala signed-off as a factory Ford driver in second place with Mikko Hirvonen third in the second works Citroen.

Latvala’s finishing position and victory on the Power Stage this afternoon earned sufficient points to land third in the final drivers’ table ahead of Mads Ostberg, who led after day one but slipped back on day two with set-up issues and a costly spin.

“For sure I really wanted to win this rally,” said Loeb, who is targeting a partial programme of WRC events in 2013 as he revs up for a planned assault on the FIA World Touring Car Championship with Citroen two years from now.

“We were really struggling in the start because it was really tricky on the first day. On the Tarmac I was able to take the lead but today was not easy because we had some strange tyre choice and Jari-Matti was pushing very hard and getting closer.”

Loeb opted for a combination of soft and hard compound Michelin covers for Sunday’s closing trio of stages in the belief it would be raining in the middle test - the 26.51-kilometre Santa Marina Power Stage.

However, while it was damp in sections due to light drizzle, the anticipated heavy deluge didn’t materialise and Loeb’s tyre choice proved far from ideal for the conditions.

“I would like to have done one more stage because it has been good to fight with Loeb,” said Latvala, who will join Volkswagen Motorsport from 2013 as his former team M-Sport prepares for a new era following Ford’s decision to end its WRC sponsorship.

“I have had some fantastic years with Ford and thanks to Malcolm Wilson for being so supportive even though I’ve had many crashes.”

Ford privateer Mads Ostberg finished fourth, 9.6s behind Hirvonen, with Jarkko Nikara moving up to a fine fifth after Ott Tanak and Hans Weijs both crashed out. Craig Breen secured the Super 2000 World.

P-G Andersson finished eighth for PROTON with Dani Sordo battling back to ninth following early delays. But it was a case of what might have been for the Spaniard, who won a total of six stages, including four on Sunday, in his Prodrive-run MINI.

Evgeny Novikov beat Petter Solberg to the final drivers’ championship point in tenth despite a 10-minute penalty when the tread depth of his soft-compound DMACK tyres was found to be under the 1.6-milimetre minimum requirement due to excessive wear on Saturday afternoon’s dry stages.

Next year’s WRC season fires into life on Rallye Monte-Carlo on 15 January 2013, 65 days from now.