ONE STEP CLOSER TO HEAVEN…

Sébastien Loeb and Daniel Elena Auteur racked up four stage wins to double their lead on day three of the Rallye de France-Alsace. The Franco-Monegasque crew will therefore start tomorrow’s final sprint in a very relaxed mood, hoping to be crowned World Champions for the ninth time come Sunday evening. With Mikko Hirvonen and Jarmo Lehtinen comfortably established in third place, the Citroën Total World Rally Team is also on course to add an eighth title to its competitive record. 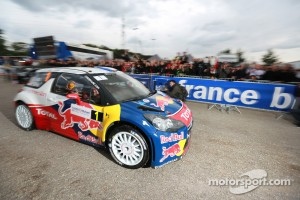 Day three of the rally was the longest leg, with 192km of timed sections, including two runs on the infamous, 43.45km-long Pays d’Ormont stage. With clear skies greeting everyone at dawn, the crews didn’t hesitate when making their choice at breakfast: coffee and five ‘hard’ Michelin Pilot Sport tyres all round, please!

Unquestionably the man to beat at this rally, Sébastien Loeb started the day with a stage win on “Massif des Grands Crus”. Mikko Hirvonen finished second, just a fraction behind his team-mate, to move clear of Petter Solberg, who went so far off on the stage that he might have made an early start to the grape-picking season... But with Jari-Matti Latvala still on his tail, Sébastien Loeb couldn’t ease off at all. After making a minor mistake on Pays d’Ormont, the Finn lost 18s in one fell swoop to the leader. Seb found himself with a 33s lead: “That means we’ll be able to take it a little more easily in the trickiest sections, without turning it into a Sunday drive, as it were! We’ll still need to drive at a good pace to avoid making any mistakes.”

Despite suffering from a heavy, energy-sapping cold, Mikko Hirvonen felt like he had wings on the tarmac of the Vosges: “I have the feeling that I am making progress and I got closer to Jari-Matti this morning. I’m going to continue pushing to keep up the pressure on him. We need to be ready to take the slightest opportunity.” Mikko signalled his intent with his first stage win on SS13, but it was a win he shared with his rival and fellow countryman.

Despite two further stage wins on Pays d’Ormont 2 and Pays de la Haute Bruche 2, Seb failed to extend his lead by the end of the afternoon. He arrived back at the Strasbourg service park with a 29.7s lead. “It’s going pretty well,” was his comment as he faced the mass of microphones and cameras. “As the conditions stayed dry, I didn’t really ease off. We might well have some rain tomorrow and I’d rather start the final leg with a relatively comfortable lead. I can’t wait for tomorrow’s stages, because they really do run through the area where I grew up.”

Holding onto third, Mikko lost a few seconds after a bit of scare on SS15: “I hit a large rock which was in the middle of the road, and I feared that I had picked up a puncture. We’re still there, without having made any real mistakes since the start of the rally. I am pleased with my performance today. In fact, there was only one stage which wasn’t very good for us. Apart from that, we were close to Seb and Jari. Although it’s shorter, the final day looks like it might be complicated. If it rains, the roads will be even dirtier and muddier. I will keep pushing without taking any risks that might jeopardise the result that is shaping up for the team.”

“It was an intense day for every member of the team,” commented a relieved Xavier Mestelan-Pinon, Citroën Racing Deputy Team Principal. “We were constantly looking to improve the set-up to optimise the handling of the cars and our drivers pushed hard all the way. They didn’t make any mistakes and Seb managed to extend his lead ahead of tomorrow’s final leg. There are only 60km of stages left, but that doesn’t mean it will be plain sailing. If it rains tonight, tyre choice will become very important and the crews will be faced with particularly tricky conditions.”

Starting in sixth on Saturday morning, Thierry Neuville inherited fifth place after Solberg retired. He then set about chasing down Dani Sordo, but the 20-second penalty he received for being late at a time control saw the Citroën Junior World Rally Team drop back to sixth again. Undaunted, he went on to set some good times, enabling him to close the gap to Mads Østberg and Dani Sordo. The Belgian is now only 8s adrift of fourth place: “In the end, it has been a good day, as we have almost made up all the time we lost. That’s what we’ll be aiming for tomorrow, on roads which are not dissimilar to those you find in Belgium.”

M-Sport duo fight on in France