In emotional scenes at the finish of the final stage in his hometown of Haguenau, Loeb and co-driver Daniel Elena celebrated victory by 15.5s ahead of factory Ford driver Jari-Matti Latvala.

It’s not possible to get better than this, it was a dream all weekend in front of all these fans.

“It’s incredible,” said Loeb, whose title was the 20th drivers’ crown scored by tyre firm Michelin. “We were dreaming about this moment at the start of the rally having lived this two years ago. Now we are here again with the victory and the championship in front of all these wonderful people. It’s not possible to get better than this, it was a dream all weekend in front of all these fans. We couldn’t believe the atmosphere two years ago, it was amazing then and it’s amazing now.”

With rain affecting the morning loop of three stages, and mud and damp sections a constant menace in the afternoon, Loeb, Latvala and Mikko Hirvonen - in the second factory Citroen and the only driver capable of denying Loeb the title - drove with caution throughout the day to finish in that order, a result that thrilled Latvala.

“To be honest it is my best Tarmac result,” said the Finn. “I have never ever been so close to Sebastien Loeb on a Tarmac rally if you think about the overall gap so I need to be happy.” 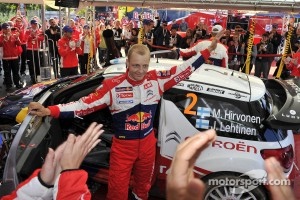 Citroen Junior driver Thierry Neuvile was less circumspect than the leading trio, claiming a total of five stage wins as he climbed from sixth to fourth in impressive fashion, demoting Mads Ostberg and Dani Sordo in the process.

Adapta Fiesta pilot Ostberg took fifth - his best result on asphalt - but Sordo dropped out after a heavy impact on the sump guard of his MINI John Cooper Works WRC on stage 18 bent the engine mounting and moved the power steering pump, resulting in a lost of power steering fluid and failure on the Haguenau street stage.

Ott Tanak won the Power Stage in a strong sixth overall. M-Sport Fiesta team-mate Evgeny Novikov lost almost three minutes on stage 18 when he rolled into a field and suffered considerable delay trying to regain the road. Miraculously, Novikov’s car suffered cosmetic damage only and he was able to finish seventh.

Chris Atkinson finished eighth for WRC Team MINI Portugal with Martin Prokop ninth and Sebastien Chardonnet an impressive 10th on his first run in a DS3 WRC in the world championship.

Brazil World Rally Team’s Daniel Oliveira went off the road on stage 18, while countryman Paulo Nobre failed to complete stage 21. Petter Solberg restarted under Rally 2 rules following his crash on day two but finished outside of the top 20 in his works Ford. However, there was no restart for Qatar World Rally Team’s Nasser Al-Attiyah after he also went off the road on Saturday.

M-Sport duo fight on in France