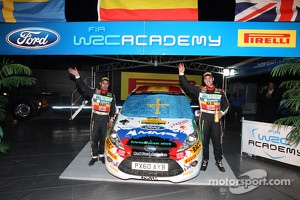 Supported by Ford Racing in Europe and with control tyres from Pirelli, the WRC Academy has witnessed some of the most competitive rallying in the field this season, with the Ford Fiesta R2 demonstrating some impressive pace and reliability throughout the year.

The first day of competition in Spain encompassed two loops of three gravel stages, interspersed with 15 km of twisting asphalt, and provided some action-packed rallying. As the hills west of Salou witnessed some of the most treacherous conditions of the season, the WRC Academy crews showcased their potential once again – regularly posting times worthy of the top-20.

With his home crowd behind him, it was Suárez who mastered the tricky conditions. Setting a consistent and composed pace, the 21-year-old established a commanding lead of over a minute heading into Saturday’s all-asphalt adventure.

But with five out of six stage wins to his name, Tidemand gave the Spaniard a run for his money and had been comfortably in control until a double puncture through the second pass of Terra Alta (SS5) dropped him down to second.

Recovering well despite a shaky start, Evans and new co-driver Sebastian Marshall developed their relationship throughout the day – so much so that they claimed a second fastest time through SS4, followed by a stage win on the next stage, to propel them into the final podium position.

However there was further heartache for Fredrik Åhlin who became lodged on a mud-bank having taken avoiding action to dodge a rock on SS3.

Having to run 400 meters in search of helpful spectators, the youngster – who had been part of a Swedish one-two in the rally’s early phase – lost a lot of time, but remained a creditable fourth heading into the final day.

There was also drama for John MacCrone. Having demonstrated his growth as a driver on both surfaces, the treacherous conditions forced the Scot off the road on SS5 – forfeiting his podium position and leaving him no option but to restart under Rally 2 regulations the following day.

The same stage saw similar misfortune befall Timo Van de Marel who had been running in a strong fourth place until he fell foul of the mud-strewn roads.

After an eventful and unfortunate day for Brendan Reeves, the 23-year-old saw his chance of securing second in the championship fall through his grasp as he lost over two minutes with a puncture on SS3.

Further misfortune befell the Australian during the final service 45 minute service when the team discovered broken valve springs on his engine which required him to take Rally 2 penalties in order to return his Ford Fiesta R2 to full health for the final day.

Elsewhere, enjoying his first venture to the world stage, Aron Domżała successfully completed his first day of competition in the WRC to finish the day in eighth place respectively.

With just one day of smooth asphalt stages left to run, the WRC Academy crews tackled two loops of three identical stages north-west of the rally-base in Salou.

Keeping a cool head, Suárez had his lead well protected – even claiming a stage win through SS8 – and brought his Ford Fiesta R2 home to claim his first WRC Academy win and a well deserved second place in the WRC Academy Cup*.

The day’s stage victories were shared between MacCrone, Suárez, Tidemand and Evans – all impressing on the sealed-surface tests. But with yesterday’s action establishing some big gaps, positions remained largely unchanged.

Hitting a tree at high speed on SS10, Fredrik Åhlin was forced to retire from the event. The Swede was air-lifted to hospital and diagnosed with a broken rib – he was held over night for precautionary checks. Co-driver Morten Erik Abrahamsen was uninjured in the incident.

Tidemand closed his maiden season with his third podium of the year in second, with Evans ending what has been a dominant year for the Welshman on the final step of the podium in third. MacCrone recovered well to claim fourth with Van der Marel fifth, Reeves sixth and Domżała seventh. 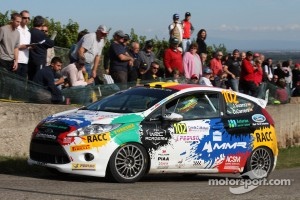 We kept a cool head throughout the rally yesterday, and then today we pushed a little bit more, but made sure that we finished all the stages.

“Everybody from my region is here to support me, and I am really happy that I could win for them here in Spain.”

Pontus Tidemand said: “I’m really happy with the second place as I had good speed on both gravel and Tarmac which is good. It was just the puncture on the first day that cost us the win. But still, I am happy with the pace we were setting.

“When everything has been working well, we’ve been constantly in the top three all season – that is a real positive to take from this year I think.”

Elfyn Evans said: “It has been a difficult rally. A very difficult start as it took a while for me and Seb [Marshall, co-driver] to adjust to the car. We did some short stages in Belgium before coming here, but this was the first true test for us.

Then we had a puncture on SS3 that cost us a bit of time, so we ended the afternoon quite a bit behind yesterday.

“We started today with another puncture on the first stage [SS7], but since then things went a lot smoother. We secured two fastest times and a second fastest time so it was good for us to see that our partnership is starting to really gel together.

“A podium isn’t a bad way to finish the season. Jose [Suárez] and Pontus [Tidemand] have driven really well this weekend, so I am glad for them and now just looking forward to next year.”

John MacCrone said: “It’s been good and it’s been bad. We set some good times, but I wasn’t very happy to have gone off yesterday – I think we probably threw away a strong result with that one which is a bit of a shame.

“I think we showed better pace on gravel than we have on previous events – also the pacenotes were a lot better on gravel which is good. We set a couple of fastest stage times on the Tarmac too, so I’m happy with that.”

Timo van der Marel said: “Yesterday was just like Portugal and on the long stage [SS5] we got stuck in the mud. It was actually no big deal, but then three or four cars later another competitor crashed into us and we slid off the road and couldn’t go any further.

“Today has been quite good actually. The stages were a lot more fun that I had expected them to be from the recce – especially the long stage, which was really nice to drive.

“When Fredrik crashed on SS10 it was really shocking and actually quite scary, so I wasn’t really fully concentrated for the last two stages. But we are hearing that he is OK and back to his usual self now so that’s good.

“All in all, it’s not been a bad rally for us. We made no damage to the car and now just have to wait and see what next year brings.”

Brendan Reeves said: “This certainly wasn’t our event. We had a puncture yesterday and then the valve springs went on us so we decided to fix it and take the penalty rather than run the risk of blowing the engine today. That meant that we were in no-mans land today.

“We finished fourth in the championship – which is one better than last year – but we really came here to get second. It is really disappointing. Our times were much better in the dry this afternoon, but even then our pace wasn’t quite able to match the guys at the front.

“But that is just the way it is something and we will hopefully be on to brighter and better things next year.”

Aron Domżała said: “Being a part of the WRC Academy has been a very nice experience for me. The stages were amazing – I just loved the whole challenge!

“OK, this is the most interesting and probably the most difficult rally I have ever competed in, but on the second day I felt that my pace was getting a little bit better.

“We had a lot of luck and didn’t have a single problem with the car – it has been a really amazing weekend.”

Candido Carerra, 2012 FIA WRC Academy Co-driver Champion (*), said: “I am very happy – the co-driver’s championship was very important to me. Jose [Suárez, driver] has done a very good job through the whole season.

He has just been improving all the time and getting better and better with every rally.

“To win here in front of my people is an amazing feeling. There are a lot of good co-drivers from here – Luis Moya for example – maybe one day I can be as good as him too!”

(*) Subject to official confirmation of the results by the FIA.