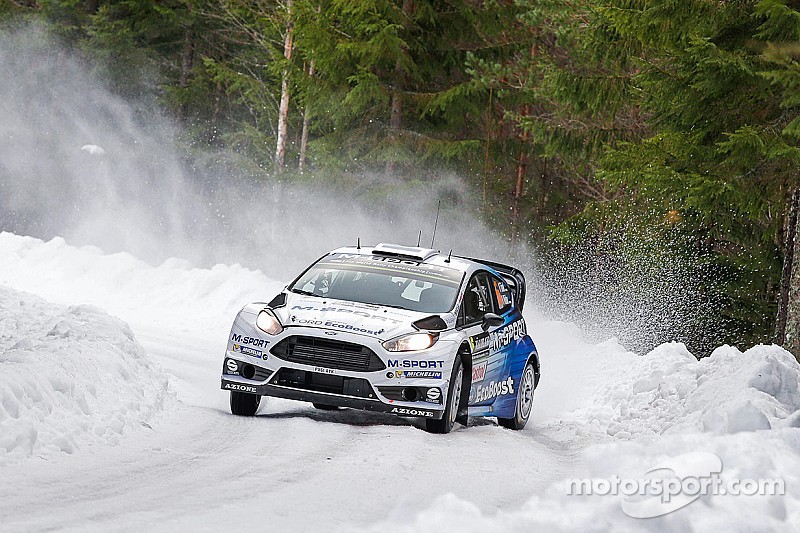 Having to contend with inconsistent grip levels through the morning loop, Ott Tänak and Elfyn Evans bided their time.

M-Sport World Rally Team’s Ott Tänak and Elfyn Evans showed real maturity as Rally Sweden embarked on the penultimate day of competition today. Making the most of the tricky conditions, the pairing head into tomorrow’s final stages in fifth and eighth places respectively.

Having to contend with inconsistent grip levels through the morning loop, Tänak and Evans bided their time. Knowing all too well how unforgiving the Swedish stages can be, the pairing adopted an intelligent approach – opting for a risk-free strategy that kept their Ford Fiesta RS WRCs firmly planted to the stages.

Having gained the vital knowledge and experience from the opening loop, both drivers upped their pace significantly over the second pass.

As the eleventh car on the road, Tänak and co-driver Raigo Mõlder found themselves with the worst of the road conditions. The second pass proved more fruitful, but the Estonians still had to think cleverly. With more and more gravel exposed by the cars ahead, they had to reign in their speed to protect the studs.

Their caution paid dividends – allowing the pairing to maintain a strong fifth place and secure the second fastest time through the second pass of Hagfors Sprint (SS17).

In the sister M-Sport Fiesta RS WRC, Evans benefitted from a more advantageous road position than that of his team mate. Making the most of the more predictable grip levels, the Welshman was beginning to rebuild his confidence and impressed by significantly increasing his seconds per kilometre when compared to that of the leading pack.

Having made a considerable step-up in performance from this time last year, Evans and co-driver Daniel Barritt were happy with their pace – albeit ruing yesterday’s misjudgement under braking which cost them two minutes in comparison to the front runners.

Ott Tänak (5th) said: “I’ve had quite a nice day – we were struggling quite a lot yesterday but today was better. Okay the first loop wasn’t so good because of our road position, but generally I think it’s been good.

“There isn’t really anything to push for so we’ve just been concentrating on having a clean run with no risks and no moments. I’m happy from that point of view. This is the position that we’re in and I want to keep it so it’s just a case perfecting the notes and ensuring that we make it to the end.”

Elfyn Evans (8th) said: "It was a difficult morning and we lost a lot of time in the first loop. We didn’t have the confidence but this afternoon has been a lot better. The times have been a lot more promising and more where they should be to be honest.

“I think it mostly comes from being a bit more relaxed but the conditions have also been a bit more predictable which helped. We’re still lacking some confidence in places, so we’ll work to put that right tomorrow.”

Team Principal, Malcolm Wilson OBE, said: “It’s been another difficult day but Ott [Tänak] and Elfyn [Evans] managed to keep well out of trouble. I think it’s fair to say that neither felt particularly comfortable with the conditions this morning, but it was good to see them bounce back with some good times this afternoon. As we have seen throughout this event, anything can happen so let’s see what tomorrow brings.”

Yuriy Protasov (10th) said: “I’m very happy with the job we have done. I think we have been driving well and even though the speed is not up there with the top drivers all of the time, I am very happy for us this weekend.”

Henning Solberg (15th) said: “Sometimes this is just the way it goes, and it is just the way it has gone this weekend. We had some problems with the gearbox this morning but the mechanics were able to fix that in service. Now I’m just enjoying the stages and looking forward to having some fun tomorrow.”

Pontus Tidemand (6th WRC 2) said: “After yesterday’s time loss we wanted to go out, push hard and have fun. We have done that today and the last stage [SS18] was definitely my stage! We had a great tyre strategy and it was fantastic to see so many Swedish flags and supporters out on the stages. Every stage should be like that!”