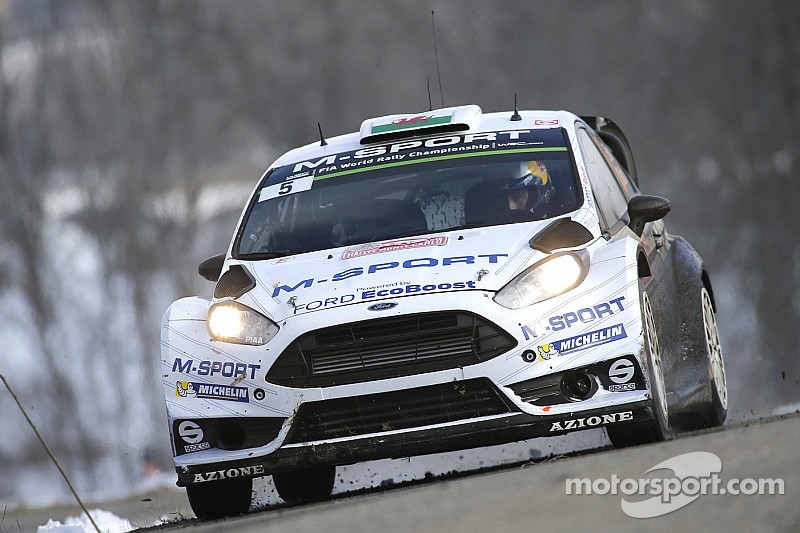 Despite suffering some misfortune on the penultimate day of competition, the team is encouraged by the speed, potential and never-give-up attitude of their young charges.

Evans and co-driver Daniel Barritt finished the event in a solid seventh place but it could have been so much more. The Welshman was in a strong fifth place – chasing fourth – when he clipped a wall through “Prunieres – Embrun 2” (SS11) and damaged the rear suspension of his Ford Fiesta RS WRC. Never willing to give up the fight, he and Barritt resourcefully fashioned a temporary repair which avoided retirement and kept them in the fight.

The conditions were very tricky and the grip level changed on almost every corner so it was a proper Rallye Monte-Carlo!

Before the event Evans commented that he wanted to increase his speed on all 13 rounds of this year’s championship; and so far it is mission accomplished. The Welshman may be lacking experience of this notoriously difficult event, but he overcame that – proving that he has the ability to challenge towards the head of the field with a third fastest time through “La Salle en Beaumont – Corps 1” (SS3) as well as a number of fastest split times.

Tänak also proved that he has the natural speed and ability to challenge for a podium as the season progresses. The Estonian and his compatriot co-driver Raigo Mõlder were running as high as second overall before being caught out by an unsighted patch of gravel after a crest through “Lardier et Valenca – Faye” (SS10).

His Fiesta RS WRC slid off the road down the side of a steep embankment, but Tänak refused to accept defeat. Rallying the enthusiastic spectators around him, the Estonian achieved the seemingly impossible – re-joining the stage and avoiding what would have surely resulted in retirement for a less determined crew.

Despite finishing in 18th place, the Estonian collected two manufacturer points which can make all the difference come the season’s end.

There may have been some disappointments for the team this weekend, but the potential is clear to see. Evans and Tänak have all of the natural speed, skill and character to produce a successful season for the M-Sport squad; and that bodes well for the events to come.

Elfyn Evans (7th) said: “There’s a feeling of what could have been at the end of this event. The potential was definitely there to do more, but there were a couple of silly mistakes on my part – one of which was extremely costly. We had some very good tyre choices throughout the weekend, but then again some weren’t quite so good so there are some things to learn.

“Overall the speed has been good and that is definitely a big positive that we can take from this weekend. We can also see where we went wrong which is important for the future and I’m looking forward to coming back and having another go at the event next year.”

Ott Tänak (18th) said: “It’s not been such a bad weekend for us. We were not pushing – just trying to drive with a reasonably good rhythm. The conditions were very tricky and the grip level changed on almost every corner so it was a proper Rallye Monte-Carlo! That is what makes this rally so difficult and that’s why you need to have really good pacenotes and have the experience to know how the conditions are changing from one section to the next.

“I think we managed that for the most part, unfortunately we just had one moment yesterday which lost us a lot of time. But we have certainly learnt a lot. It was a really hard experience but I am sure that it will be good for our future and that we will do better next time.”

Team Principal, Malcolm Wilson OBE, said: “The result is not what it could have been, but I have been extremely impressed by both Elfyn [Evans] and Ott [Tänak] this weekend. We were running as high as third and fourth overall [Tänak as high as second after SS1] and it is fair to say that we never expected to be in that position. They have the speed, but they also have the will and the determination to succeed. They’ll never give up and that’s what will see them go far. Needless to say that the whole team is extremely encouraged by the huge potential they both possess.

“Finally, I want to commend two unsung heroes of the WRC: the spectators who helped Ott and Raigo [Mõlder, co-driver] re-join the event yesterday afternoon; and our mechanics who had to make some significant repairs in limited time over the past two days. I fully believe that we have the best technicians in the sport. They’ve proven their skill time and time again and it is a pleasure to have each and every one of them under the M-Sport banner.”