M-Sport fight back to strong finish in Sweden 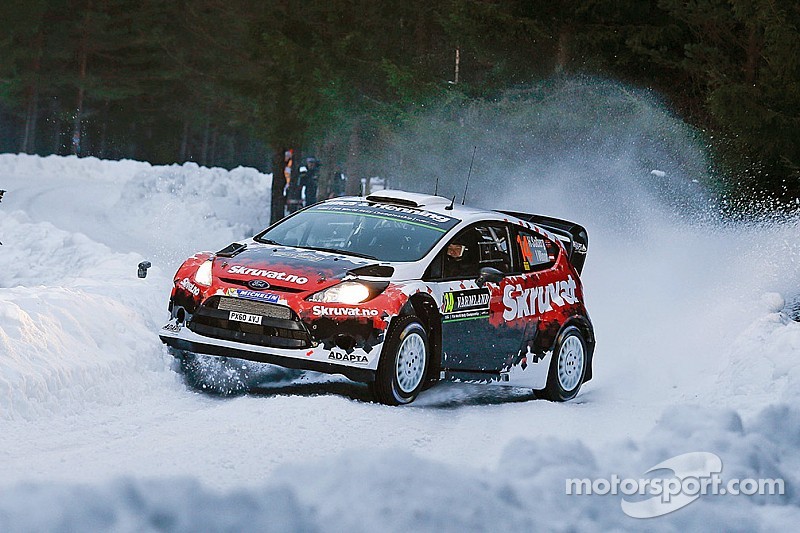 Having lost 20 seconds caught in a snow bank on the first forest stage (SS2), Tänak and co-driver Raigo Mõlder spent much of the weekend rebuilding their confidence amidst the worst of the road conditions.

Refusing to give up the fight, the Estonians combined a never-up-give attitude with flashes of speed. The pairing posted the second fastest time through the second pass of yesterday’s Hagfors Sprint (SS17), and remained as determined as ever to finish the event.

Their determination paid off. Keeping their heads down and their Ford Fiesta RS WRC clear of the pitfalls synonymous with the Swedish stages, the Estonians prospered where those around them faltered to bring home a strong result for the team.

A few more rallies like this and we can look to up the pace so that is really good for the future.

In the sister M-Sport Fiesta RS WRC, Evans and co-driver Daniel Barritt displayed a vast increase in speed from this time twelve months ago – proving that they have the pace to challenge within the top-five on snow.

Were it not for an encounter with the snow banks through the second pass of Röjden (SS8) which cost them almost two minutes to the leading pack, they would have been within sight of a podium position.

Despite ruing Friday’s error of judgement, Evans found himself in an intense battle for sixth place on the final stage of the rally (SS21). Locked in a thrilling duel with Kris Meeke, the Welshman came out on top – winning the battle of the Brits, claiming sixth place overall and propelling himself and Barritt into sixth place in the FIA World Rally Championship driver and co-driver standings.

Ott Tänak (4th) said: “I’m really happy to have come away with fourth position. We struggled in the beginning – the road position wasn’t great and I made a little mistake early on. After that we weren’t really in any sort of a battle so we just had to play it smart and stay on the road – and here we are with a really strong result.

“It was good to regain the confidence. Now we can look to build the speed step-by-step and when we have a strong feeling we can push a bit more. A few more rallies like this and we can look to up the pace so that is really good for the future. I am sure that we can be stronger as the season progresses.”

Elfyn Evans (6th) said: “It’s been an event of two halves. We made a mistake which cost us a lot of time on Friday and we struggled to find the confidence at times, but generally I think we’ve learnt a lot and we were able to show some pretty good pace towards the end.

“We only do one snow rally a year and this is only my second so it all bodes well for the future. I’m really pleased with the progress we were able to show here and I think we’ve proved our potential on this surface. On the whole, I think we did a good job.

“I actually enjoyed it a lot more than I thought I would and we had a great battle with Kris [Meeke] today. From yesterday afternoon onwards I really enjoyed the driving. We had a good feeling in the car and everything just came together as it should.”

Team Principal, Malcolm Wilson OBE, said: “It was fantastic to see Ott [Tänak] and Elfyn [Evans] fight back to what was a strong result for the team. It’s fair to say that neither felt particularly comfortable at the beginning of the event, but they never gave up. They’ve both got a real determination and we saw it here again.

“They are also both very intelligent drivers. They knew their limits, and were able to stick to them for the most part. They’ve both learnt a tremendous amount this weekend and I was particularly impressed by how much progression Elfyn was able to show on what is only his second ever snow rally.

“It all bodes well for the future and after this result I am sure that they will both head to Mexico with their confidence that little bit higher.”

Yuriy Protasov (9th) said: “This is a really good result for us. The stages were really fast and tricky and we didn’t have everything right all of the time, but when it was good, it was really good – and it was great to score my first fastest time. We have learnt so much and we are really happy.”

Henning Solberg (13th) said: “It’s not been the best Rally Sweden for us. We’ve had a few issues throughout the event but I promise you that we will come back stronger!”

Pontus Tidemand (5th WRC2) said: “It started so well but unfortunately we made a mistake on SS7 that cost us more than five minutes and any chance of fighting for the victory. After that it was just a case of driving as fast as we could and enjoying the fantastic Swedish stages.

“We have to take every positive that we can away from this weekend. I think we proved that we have good pace and everything apart from the mistake was perfect. If you took away that mistake then the result would have been really good so we just need to focus on that and move on to the next one.”