M-Sport Ford World Rally Team are pleased to announce that one of the Caribbean’s top rally drivers, John Powell, will join the team as a nominated points scorer for the final round of the 2012 FIA World Rally Championship (WRC) at RACC Rally de España next month. 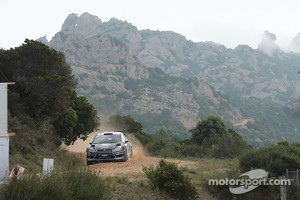 Hailing from Trinidad and Tobago and joined on-event by his regular navigator, Michael Fennell, Powell will be the first ever driver from his homeland to compete behind the wheel of the latest generation of World Rally Cars when he takes to the wheel of the Ford Fiesta RS WRC.

Having been involved in rallying for the past 17 years, Powell began his career in 1994 – claiming the Caribbean Rally Championship’s rookie award in his debut season. In 1997 he enrolled in the Pentti Airikkala driver training programme in Oxfordshire to help further his driving skills. Powell has also been privileged enough to receive tuition from experienced rally drivers the likes of two-time BRC (British Rally Championship) Champion, Jonny Milner, and three-time BRC Champion Mark Higgins.

Securing his maiden win at the 2005 Rally Trinidad, a host of class victories and championships soon followed. Amongst his recent achievements, Powell won Rally Guadeloupe in 2010, and is the defending Rally Jamaica Champion. Powell also claimed the Group N class championship laurels as part of the 2010 Caribbean Rally Championship and was the Trinidad and Tobago Rally Championship Driver of the Year in 2011.

Currently laying third in the NACAM (North American, Central American and Mexican) Championship, Powell claimed victory at this year’s edition of Rally Trinidad and is poised to make the most of his maiden WRC drive.

Here is what Powell had to say ahead of his WRC debut:

What made you decide to tackle an event in the World Rally Championship? “The [FIA] World Rally Championship is undoubtedly the highest level of competition in rallying. It is every driver’s dream to compete in the WRC and against the world’s best. At the moment I am competing in the NACAM series as well as the Caribbean Championships, and have always had a keen interest in somehow finding a way to the WRC. When the opportunity arose for a seat with M-Sport at Rally de España, there was only one answer!”

What made you chose M-Sport?* “M-Sport is one of the biggest names in the world when it comes to rallying and it is a real pleasure to be driving for them in Spain. They have an incredibly decorated history in the sport. It’s a fantastic team, and I am looking forward to an unforgettable experience on the event – and also the opportunity to race against the other M-Sport and Ford drivers.”

What do you hope to learn from competing on the world stage?* “You learn something from every rally that you do, but I’m sure the experience at WRC level is going to be on a much larger scale. As I mentioned, this is the highest level of competition so if you are going to learn anything, this would be the place to do it!

“I think for the most part competing is going to show me first-hand what it takes to compete at the highest level. And then I’ll be able to apply what I have learnt when I get back to my Regional events in 2013 where I hope to be able to share this knowledge with my fellow local drivers.”

What result will you be aiming for in Spain? “Obviously our first aim is to go out there and finish strongly. We really want to be on the overall standings by the end of the event. I am anticipating a fast field though as there are a number of drivers who are still fighting for points and with this being the last event, they are going to be quick.

“The focus is a bit different for us as it’s our first time in the WRC, but we are eligible to score points for M-Sport so that is definitely a motivating factor to go as fast as we can.”