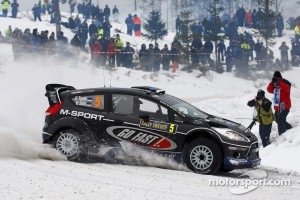 Based entirely in Sweden, the second leg of the 60th Rally Sweden provided the backdrop for an impressive showing from the M-Sport Ford World Rally Team. Ott Tänak recovered well from Day 1 disappointment to prove his potential by securing his first WRC stage wins. Continuing his outstanding start to the season, Evgeny Novikov lies fifth overall heading into Day 3, and guest driver Michal Solowow sits 20th going into the final day of competition tomorrow.

Proving that their fifth place at Rallye Monte-Carlo was no one-off, Novikov and co-driver Denis Giraudet impressed throughout the morning loop to secure a string of top ten times. Claiming the fourth fastest time in his Ford Fiesta RS WRC, the 14.23km pass over SS12 saw the Russian outperform 2005 Rally Sweden winner, Petter Solberg – just 0.3 seconds adrift of snow-master Mads Østberg in third. A problem with the windscreen misting up halted the Russian’s charge on the morning’s final two stages, but revitalised after service, Novikov was back on the pace in defence of his fifth place.

A string of top-ten times followed for Novikov in the afternoon. Going 6.8 seconds quicker than eight-time World Champion, Sébastien Loeb on SS17 – the fourth fastest time, just 7.3 seconds shy of pace-setter Mikko Hirvonen – secured his fifth place at day’s end. The Muscovite now has a 44.4-second lead over Loeb heading into the final day of competition tomorrow.

There were mixed fortunes for Tänak and co-driver Kuldar Sikk over the morning loop. SS11 saw the Estonian produce the drive of the stage as despite being disadvantaged by running second on the road, Tänak posted the fifth fastest time over the 24.63km loop, just 13.5 seconds adrift of pace-setter, Jari-Matti Latvala. Unfortunately, disaster struck on SS12 as the 24-year-old misjudged the speed of a right-hand corner, going off the road and losing 20 minutes to his competitors as spectators helped them to regain the road. Nevertheless, undaunted by his early error, and with no lasting damage to his Ford Fiesta RS WRC, Tänak proved his potential by setting the fastest time over the 1.87km sprint stage to claim his first WRC stage win.

Tänak impressed again in the afternoon with the sixth fastest time on SS16 – 4.2 seconds ahead of Loeb and just 1.2 seconds adrift of 2003 World Champion, Petter Solberg. The Estonian’s day was topped off with the second fastest WRC stage time of his career with the stage win on the second pass over the Hagfors Sprint.

Elsewhere, thoroughly enjoying their time behind the wheel of the Ford Fiesta RS WRC, guest crew Michal Solowow and Maciek Baran produced a controlled drive in their Ford Fiesta RS WRC. Becoming stuck on a snow bank on SS17, the Polish driver lost some time but remains happy to be back competing on the world stage.

“Everything is working well. We are pushing but it is still very slippery out there with much more ice than I had expected.

“Tomorrow we will push and try to maintain our fifth place. [Sébastien] Loeb is just 40 seconds behind us so we need to make sure we have a clean run with no mistakes.”

“Today was mostly ok. On the first two stages we had a lot of snow so it wasn’t very easy to be first on the road. This is my first time in the WRC being first on the road so it’s all good experience, but for sure it’s not the easiest thing to do.

“The last sprint stage was probably the only stage where we had a small advantage going first because the roads were quite icy and the stage became harder and harder to drive as it went on.

“Overall I think we had a good run this afternoon. Tomorrow we will be first on the road again and on the recce these stages looked like they could be quite tricky.

“We made the mistake on Friday so now it’s just about getting the experience and trying some new things.”

“This afternoon’s stages were very nice. We made a few small mistakes – twice off the road – but we had some good luck and we are still here.

“I am very much looking forward to tomorrow. We’ll go out and just drive as fast as we can.” 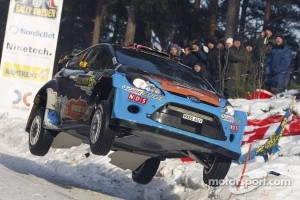 “For sure this morning was quite good for us and also in the afternoon everything was working a lot better than yesterday and we gained some time on Petter [Solberg].

“We decided to take a different tyre strategy on Sagen so that we will have better tyres for tomorrow and I think it paid off. That worked out really well but then we had an electrical problem in the car which cut the engine. It was just over a few hundred meters but we lost a lot of time.

“We had hoped to take about ten seconds from Petter on that stage but it didn’t happen so it was a bit unfortunate. But ok, the gap is only eleven seconds tomorrow and I think it’s possible because tomorrow it’s all flat-out and no strategy.

“I want the podium for sure, but Petter wants it too so we shall just have to wait and see what happens tomorrow. I think it will be a big fight!”

“For me this rally is much easier than Monte-Carlo or Wales and I am much more confident with the car.

“This afternoon was not bad but still we are unable to catch Patrik [Sandell]. On the long stage [SS15] we made some mistakes with the pace notes so we lost some seconds. But then Patrik made a mistake so now we are right with him.

“I know the stages tomorrow, but so does he. For sure we will try to fight with him but it’s very close – the gap is only 2.5 seconds, so it’s possible.”

“Today has been really good fun. We made a small mistake on the second-to-last stage [SS17]. The car started to slide a little and we got caught in a snowbank for some time which cost us quite a few seconds.

“Apart from that, everything else is great. The car is working well and tomorrow I will focus on trying to improve my times and get even more familiar with the Fiesta. It’s a fantastic car to drive – I just need more experience if I’m going to really challenge the guys in front.”

“This afternoon was not so good. We broke a front brake disc quite early on into the second stage out of service [SS16] so we only had one brake at the front. It’s been a bit of a mess really.

“We didn’t get chance to change the tyres because we were working on the car going into the second-to-last stage [SS17] so we lost all the studs, and then on the super-special [SS18] I had no studs on the rear at all so it wasn’t the best of afternoons!

“But we’re still here and we haven’t gone any further back in the S-WRC. If we can maintain this, it will be a good result and we’ll still be leading the Championship so we have to take that as a positive!”

“Today has been nice. I have tried to push a little bit and I think I’m driving safely to finish with a good time at the end of each stage.

“Tomorrow, like today, we will not push so hard on the first loop and try to learn the stages for the second when we can try to push the limits a little bit more.”

Hirvonen keeps up the pressure