M-Sport refuse to give up the fight 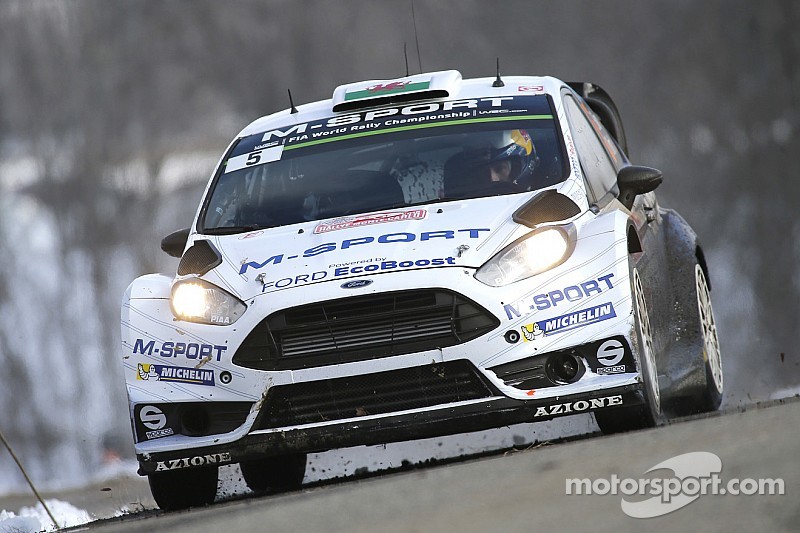 Following their impressive performance in the early phases of Rallye Monte-Carlo – the opening round of the 2015 FIA World Rally Championship – Ott Tänak and Elfyn Evans encountered some set-backs today. Despite being caught out by the tricky conditions, the M-Sport World Rally Team refused to give up the fight.

Starting the day in a strong fourth place, Tänak had no intention of hunting down a podium position and remained firmly focused on his own event.

With the first speed test (SS9) cancelled, the crews made their way to “Lardier et Valenca – Faye” (SS10). The stage was largely dry with a three kilometre stretch of ice and snow. Tänak and co-driver Raigo Mõlder mastered the difficult section, but running further down the field they had to contend with much dirtier road conditions.

We had made the corner, but when we put the power down on the exit it was a lot more slippery than we had expected and the rear kicked out and clipped the wall.

Encountering a patch of gravel over a crest 38 kilometres into the stage, the pairing’s Ford Fiesta RS WRC slid off the road. With the help of the exceptional help of the enthusiastic spectators the Estonians were able to re-join the stage but lost more than 18 minutes as a result.

As the car returned to service it was all hands on deck as the M-Sport technicians produced another master class. Making a number of significant repairs – including removing the gearbox to change the clutch – the number six Fiesta left service on time; a job expertly done in just 30 minutes.

Taking his time to rebuild his confidence on the first stage of the afternoon (SS11), Tänak was back up to speed for the second (SS12) – posting the sixth fastest time through the famous “Sisteron – Thoard” stage.

In the sister M-Sport Fiesta RS WRC Elfyn Evans was catching fourth-placed man Mads Østberg. With the upper hand through the drying sections, the Welshman posted a number of impressive split times – taking four seconds out of his rival on the final split alone.

As they embarked on the afternoon stages, Evans and co-driver Daniel Barritt were hoping for more of the same. Unfortunately, the Brits clipped a wall through “Prunieres – Embrun 2” (SS11) and were unlucky to damage the rear suspension of their Fiesta RS WRC.

Proving that their mechanical skills are as strong as their driving skills, they were able to make a temporary repair which got them though the final stage (SS12) and safely into parc fermé on Monaco’s glamorous harbour front.

Despite losing time, the fix kept Evans in the game with all still to play for during tomorrow’s final day of rallying.

Elfyn Evans (7th) said: “We had made the corner, but when we put the power down on the exit it was a lot more slippery than we had expected and the rear kicked out and clipped the wall. It broke a suspension arm so in a way we are very lucky to be here and to have made it back. It was a bit touch and go to be honest, but at least we are here. It is not ideal to have dropped two positions by all means, but it’s better than not being here at all.”

Ott Tänak (20th) said: “After this morning’s disappointment it was important to take our time and rebuild the confidence. It was good to slow it down because it’s so difficult when the speed and the grip are changing so often – it’s hard to find a good rhythm.

“We’ve had some more time to relax and we’ve found some places where we can improve which is what we wanted to do. We’ve not pushed at all; just made some changes to the notes and made it through safely.”

Team Principal, Malcolm Wilson OBE, said: “It is obviously disappointing to have encountered some problems today after such a strong performance yesterday. Having said that, I must commend both Ott [Tänak] and Elfyn [Evans] on their sheer determination – neither were willing to accept retirement and it is that mind set which will see them go far in the future.

“Both were extremely unlucky today; but when you consider the little experience that they have of this notoriously difficult event, their speed and their attitude is very promising for the rest of the season.

“Finally I must, as always, praise our dedicated team of technicians. You never want to see them make such an extensive repair as the one they had to make today, but when you do it is an absolute pleasure to watch them at work. Our ever dedicated team are a real credit to us.”