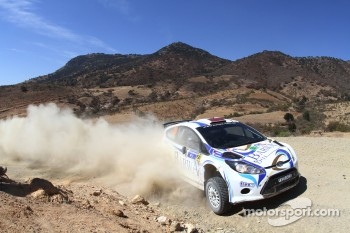 Next week’s Jordan Rally will see four Ford Fiesta S2000 crews battle it out on the banks of the Dead Sea in the second round of the 2011 S-WRC.

With three of those entries registered for class honours, competition will be fierce as the crews try to secure a podium spot and valuable championship points in order to overhaul championship leader Martin Prokop, who is sitting out the event.

Nasser Al-Attiyah experienced a rollercoaster ride of emotions at Rally Mexico - the Qatari driver took the victory but was later disqualified after his Ford Fiesta S2000 was found to be in breach of the technical regulations at post event scrutineering. Following the event in Central America, Al Attiyah returned to familiar territory to win the Kuwait International Rally in the FIA Middle Eastern Rally Championship (MERC) – his fourth rally win of 2011 so far. The 2006 P-WRC champion and six-time MERC champion will be looking to extend his winning streak to challenge for his fifth win of the season next week.

Reigning Portuguese Rally Champion Bernardo Sousa returns to S-WRC duty in Jordan after nominating to drop the previous round in Mexico. Last year’s event did not bode well for Sousa after he half-rolled his Ford Fiesta S2000 and was later excluded for a sporting infringement. However, until then the young Portuguese driver was leading the S-WRC category in Jordan and his experience of the demanding Arabian stages should make him a strong contender for a podium finish.

Hungary’s Frigyes Turán made his debut in the WRC at last year’s Rally de Portugal, and an impressive show of speed at Rally Bulgaria the following month saw him finish eighth overall. He later competed at Rally d’Espana in a Ford Focus RS WRC and was running seventh before he rolled on the final day. Turán will make his debut in both the S-WRC and in the Ford Fiesta S2000 next week where he aims to make a big impression at his first major event of the season.

Spyros Pavlides finished fourth in last year’s P-WRC and made his debut in the Ford Fiesta S2000 at last month’s Rally de Portugal, finishing 27th overall. The Cypriot is not registered to score S-WRC points, but hopes that his recent experience from piloting M-Sport’s new generation rally car will put him in a strong position to compete with his class rivals. This will be Pavlides’ second outing at Jordan Rally, he finished 17th overall at last year’s event.

“2011 has been a brilliant season so far – I’ve won every rally I’ve competed in this season and hopefully next week will be another victory for me. I know the stages well in Jordan – they are very similar to other rounds in the MERC and I am feeling very confident with the car so I think I can win. The car was running perfectly in Mexico so, of course, I was hugely disappointed after my disqualification, but I must try to push that incident to the back of my mind and aim for victory in Jordan.”

“Next week will be my second time in Jordan, I was leading the class there last year until I retired so I am aiming for a podium place next week. There’s going to be some very tough competition, obviously Nasser [Al Attiyah] will be difficult to match in terms of pace because he knows the event well and it’s his preferred surface. I really enjoy driving the Fiesta S2000 - I’m looking forward to getting back behind the wheel and if I could get a podium spot next week then it’d be the perfect start to my season.”

"It means the world to us to accomplish a place in the S-WRC but I am sure it will be an extremely hard season among extremely talented opponents. We will do our best, drive as fast as possible and gain as many championship points as we can. That's why we must finish all of the seven rallies without any accidents - we have to learn so much, but we are ready for the challenges. I like our new car - the Ford Fiesta S2000 - it goes so well, I’ve only tested it on icy stages so far and but I am ready for the hot climate and gravel stages in Jordan. I am sure that next weekend will be gruelling but rally is my life and this championship season is a dream come true."

“Portugal was the first rally I’d competed in for 12 months but I really enjoyed it. It was an event that I was using to learn the Fiesta S2000 and I didn’t want to push or put too much pressure on myself. I loved the car – it was very responsive and we had no problems throughout the whole rally. I’m really looking forward to next week, I’ve been there in Jordan before so I know the stages well and I’m used to a hot climate so the heat will not be a problem. It’ll be a nice break from my business and I will use the rally to gain even more experience in the Fiesta S2000 before I contest Greece in June.”