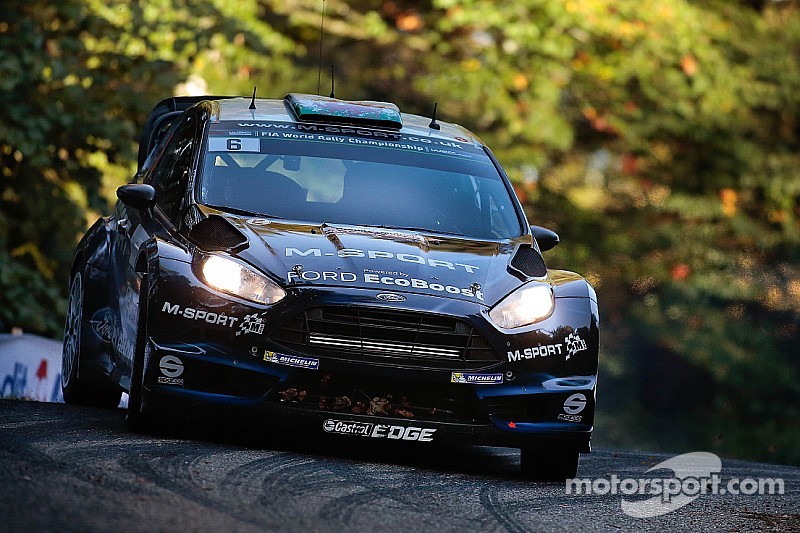 The Finn currently holds fifth place overall and is in the hunt for a coveted podium position.

M-Sport World Rally Team’s Mikko Hirvonen is on course to secure a strong haul of points at the 50th edition of RallyRACC – Rally de España. The Finn currently holds fifth place overall and is in the hunt for a coveted podium position.

Following yesterday’s spectacular Super Special in the shadow of Barcelona’s famous Montjuïc fountains, the event resumed with a day of six predominantly gravel speed tests on which Hirvonen and co-driver Jarmo Lehtinen showcased the best of their professional partnership.

One of the hardest things in this rally is switching from one surface to the other overnight.

As the late summer sun beat down on the loose-surface stages, dust made visibility an issue. Trusting his pacenotes, the Finn piloted his Ford Fiesta RS WRC to a strong fourth place after the morning loop – just 0.3 seconds adrift of the third-placed crew.

Despite losing out to a resurgent Andreas Mikkelsen throughout the afternoon loop, the Finn remains on course to defend his fourth place in the drivers’ standings. Just 4.8 seconds adrift of second place, Hirvonen will be looking to make further gains on his championship rivals as the action resumes on asphalt tomorrow.

In the sister M-Sport Fiesta RS WRC, Elfyn Evans displayed flashes of pace but was hampered by his later road position. The hanging dust made it difficult to read the stages, but the youngster held his own over the morning loop and was ready to mount a comeback with a cleaner run over the second pass.

Unfortunately, his Rally de España misfortune made an unwelcome comeback on the second pass of ‘Pesells’ (SS6). Running wide just five kilometres shy of the flying finish, the Welshman damaged the radiator of his Fiesta and was unable to complete the loop.

Thanks to the expertise of M-Sport’s technicians, Evans and co-driver Daniel Barritt will restart under Rally 2 regulations tomorrow. With their Fiesta transformed into its asphalt guise, the pairing will be keen to showcase further progression on the event’s renowned circuit-like roads.

Mikko Hirvonen (5th) said: “I think today has been pretty good. We’re not so far behind second place and there are many drivers that are really close so I think we can have a really good fight tomorrow.

“One of the hardest things in this rally is switching from one surface to the other overnight. I’m going to have to be awake in the morning to be able to change the rhythm and be competitive on Tarmac. That switch has to happen straight away.

“Of course the Volkswagen’s are really strong on Tarmac, but anything can happen so let’s see what we can do.”

Elfyn Evans (19th) said: “This definitely doesn’t seem to be one of the luckiest events for me and we’ve not had the best of days today. We had reasonable pace, but three big mistakes. The last one was enough to finish the day for us but fortunately the car doesn’t look too badly damaged.

“There’s no reason why we won’t be able to put this behind us and start a fresh tomorrow. We’re coming off the back of two very strong performances on asphalt, so we just need to reset and see what we can do.”

Team Principal, Malcolm Wilson OBE, said: “I think Mikko [Hirvonen] has had a really good day. He’s in what looks set to be a very close battle for the final podium positions and it’s great to hear him so upbeat at the stage ends. His confidence is high, and he’s looking forward to tomorrow’s Tarmac stages.

“Elfyn [Evans] was looking forward to showing what he could do on gravel. Unfortunately, there were a few small mistakes getting back into the gravel pacenotes. His mental strength is strong, so when he returns to the stages tomorrow I have no doubt that he’ll be able to put the disappointment behind him.”