Markko Martin will not be driving in Rally Japan at the end of this month, following the death of his longtime co-driver and friend Michael Park at the Rally of Great Britain this past weekend. Scene at the rally HQ in Cardiff after the ...

Markko Martin will not be driving in Rally Japan at the end of this month, following the death of his longtime co-driver and friend Michael Park at the Rally of Great Britain this past weekend. 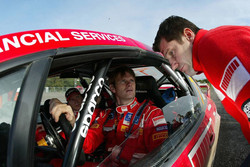 Scene at the rally HQ in Cardiff after the tragic accident: Marcus Gronholm and Timo Rautiainen.
Photo by xpb.cc.
"It is totally unthinkable," Jean-Pierre Nicolas, the Peugeot Sport director, confirmed during an Eurosport interview. "It is still far too raw. He has been affected very much psychologically."

The team entry for Marcus Gronholm and Timo Rautiainen still shows on the books for the event. Peugeot has been battling sister PSA marque Citroen for the manufacturers' championship honors, but there is a distinct possibility that Peugeot, which is set to leave World Rally Competition at the end of the year in any case, may withdraw immediately in the aftermath of Park's death.

"We're still in shock and we still can't get over what happened," said Nicolas. "We have to shake ourselves out of it to turn towards the future, but it's very hard.

"Markko has been to visit Michael Park's wife with Paul Turner, his personal manager," he continued. "He also wanted to see the car and go back to the scene of the accident to try and understand what happened. He remembers nothing at all."

The Peugeot 307 WRC that Martin was piloting with Park slid off near the beginning of the penultimate stage of Rally Great Britain, and impacted a mature tree hard on the passenger side. As the WRC cars are not required to have side impact protection, Park took the brunt of the impact, losing his life near-instantly.

"The championship is nothing compared to human lives," Nicolas said on Sunday already.

In the meantime, the team has asked the FIA for additional time to make a decision on the drivers for the Japanese event.

Statement from the family of Michael Park