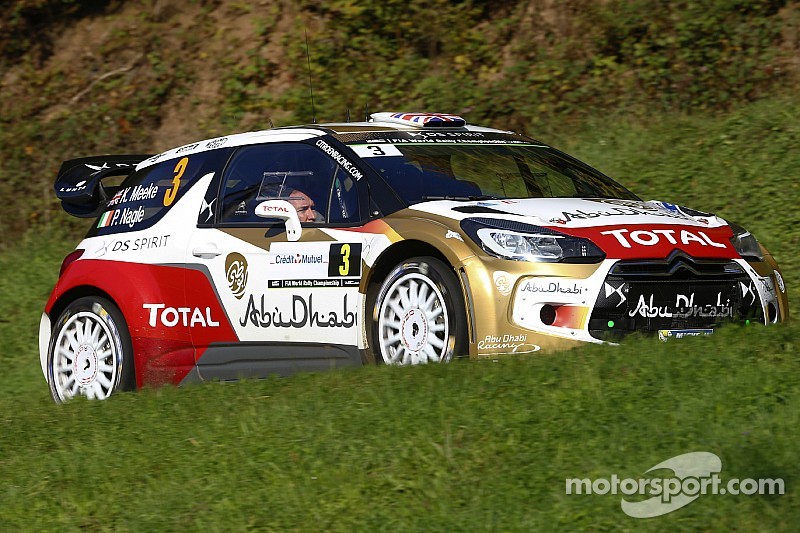 Kris Meeke and Paul Nagle strengthened their grip on third position on day two of the Rallye de France-Alsace, as they edged closer to a fourth podium finish of the season.

The night was short for the Rallye de France-Alsace crews and teams. Between entering parc ferme at the end of the first leg and returning to the service park for the start of day two, the DS3 WRC of Mads Østberg was parked for just 7 hours and 46 minutes.

The crews were nonetheless wide awake and raring to go for this morning’s stages. Third overall at the start of the day, Kris Meeke consolidated his position throughout the leg. Quick on the second loop, setting the second fastest time on Soultzeren – Le Grand Hohnack 2, he stretched his lead over his nearest challenger to over 47 seconds.

Fighting for fourth place with tarmac specialists Dani Sordo and Robert Kubica, Mads Østberg was slowed by an oil leak on the rear differential of his car. Forced to carry out repairs before the start of SS13, he was given a 70-second penalty for checking in late for the stage, demoting him to seventh overall.

After collecting two stage wins in WRC2 in their DS3 R5, Sébastien Chardonnet and Thibault De la Haye also moved closer to another podium finish in their category.

Leader of the FIA Junior WRC round since SS7, Alastair Fisher held onto first position throughout this long second leg, made up of 125 kilometres of timed stages. This evening, he leads a quartet of Frenchmen: Eric Camilli, Stéphane Lefebvre, Quentin Giordano and Yohan Rossel. If the order remains unchanged, fourth place would be enough for Stéphane Lefebvre to secure the title and with it, a WRC2 programme next year in a DS3 R5!

There are only four stages left to complete tomorrow, with no service period. However, many crews highlighted the difficulties of these closing stages during recce. And the final day of the Rallye de France-Alsace traditionally provides plenty of surprises… The day starts at 6.05am, with the Power Stage at 12.05pm and the finish expected at the Zénith de Strasbourg from around 2.30pm.

Kris Meeke: “No drama on today’s leg. We managed to improve as the day went on and get closer to the times of the leaders. The gaps aren‘t set in stone ahead of us. We know that a lot can still happen on Sunday’s stages. The new roads look pretty daunting and the weather could make a big difference. Given the lead we have over our nearest challengers, we may even have the opportunity to try something in terms of tyre choice.”

Mads Østberg: “I really enjoyed driving the DS3 WRC on the first loop. We had a good rhythm and we were beating some of the leading guys on tarmac. On SS11, I started to feel a bit of instability on the rear axle. There was a leak on the differential. We decided it was better to carry out repairs between stages to be sure of making it to the end of the day. The penalty we were given for checking in late dropped us down to seventh. It’s disappointing, but we can still score some important points tomorrow.”

Marek Nawarecki (Citroën Racing Deputy Team Principal): “We knew the challenges that this very long day would present. On such demanding stages, Kris and Mads made the perfect start on this morning’s loop. They grew in confidence despite the damp patches. This afternoon, Kris met his objectives by setting some very good times. He’s well placed ahead of the final leg. Mads had a technical problem. He managed to perform repairs and limit the time lost. He is also well placed to score points for the championship from seventh position.”