Michael Park, who died in a tragic accident during Wales Rally GB in 2005, is much missed by the entire FIA World Rally Championship community.

The Michael Park 'Beef' Trophy is awarded annually in memory of Michael Park, who died in a tragic accident during Wales Rally GB in 2005 while co-driving for his long-term partner Markko Märtin.

Michael is much missed by the entire FIA World Rally Championship (WRC) community. To perpetuate his memory a group of friends and colleagues - inspired by Vincent Laverne - commissioned the trophy. 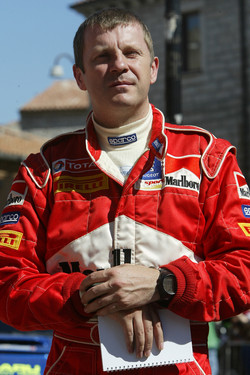 The bronze bust was created by French artist François Chevalier and was donated to Michael’s wife, Marie, and children, William and Victoria.

Each season a smaller replica trophy is awarded to a co-driver who has best demonstrated the qualities associated with Michael during his career, taking into account overall performances, attitude, commitment and other actions or achievements.

The recipient is decided by a jury of Michael’s close colleagues from the WRC community, comprising Paul Turner (Michael Park’s manager), Robert Reid, Vincent Laverne and Mark Wilford. This year there were two nominations from which to choose: Julien Ingrassia (France) and Nicolas Gilsoul (Belgium).

We are pleased to announce that for 2013 Nicolas Gilsoul has been chosen as the eighth winner of the Michael Park ‘Beef’ Trophy.

Gilsoul, 31, partners Thierry Neuville in the Qatar World Rally Team and has been influential in Neuville’s stellar season, which included a run of four consecutive second place finishes. The pair could secure the runners-up position in the FIA World Rally Championship at Wales Rally GB this weekend.

He began his co-driving career in 2000 in the Belgian Rally Championship before moving up to the European Rally Championship in 2004, when he guided Bruno Thiry to third. Gilsoul scored his maiden victory alongside his fellow countryman in the 2006 Rallye des Cardabelles Millau-Aveyron.

He made his FIA World Rally Championship debut in 2007 at Rallye Monte-Carlo and joined forces with rising star Thierry Neuville in 2011. The pair finished third in the Intercontinental Rally Challenge, having won both the Tour de Corse and Rallye Sanremo.

They signed up for a full 13-round WRC programme with the Citroen Junior World Rally Team for 2012 before switching to the Qatar squad for 2013. Neuville and Gilsoul have just been announced as the lead pairing for the new Hyundai Motorsport team in 2014.

“Nicolas is relatively inexperienced compared to his colleagues in the major teams. Indeed Wales Rally GB will only be his 28th WRC start, but he has quickly established himself right at the top of the elite group of World Championship co-drivers,” said Turner.

“Like many in the co-driving profession, Nicolas goes about his business in a low profile but highly professional way. He and Thierry have worked hard during 2013 to improve their pace notes, sometimes refusing the chance for rest and refreshments during a mid-leg service to work on bettering their notes for the afternoon stages.

“We feel Michael would see many of his own traits in Nicolas and would support this decision for 2013.

“This year we had two standout candidates and I would also like to pay tribute to Julien Ingrassia. He has enjoyed a marvellous season alongside Sébastien Ogier in Volkswagen Motorsport’s all-conquering team and deciding between Nicolas and Julien was an extremely hard decision,” added Turner.

Nicolas was presented with the trophy in front of invited media and guests at Qatar M-Sport World Rally Team’s reception in the Wales Rally GB service park in Deeside this evening (13 November).