Michael Park, one of the most experienced and respected co-drivers on the World Rally Championship circuit, was killed this morning in an accident on the final leg of the Rally of Great Britain. Michael Park. Photo by Marlboro Peugeot ...

Michael Park, one of the most experienced and respected co-drivers on the World Rally Championship circuit, was killed this morning in an accident on the final leg of the Rally of Great Britain. 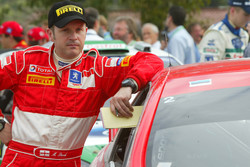 Michael Park.
Photo by Marlboro Peugeot Total.
Park and his driver Markko Martin were running in sixth place and aiming for fifth, when the accident tragically finished their race on the 27-km-long SS17, the first pass through Margam.

Their Peugeot 307 WRC slid off the road soon after the start of the stage, hitting a tree hard on the passenger side. The impact was fatal for Park, who appears to have died on impact, although Martin was uninjured.

Park, 39, from England, had co-piloted for many top-level WRC drivers in addition to Martin, including Colin McRae and Richard Burns. But his rise to fame started when he joined Martin in 2000, when the pair hooked up to campaign a privateer Toyota Corolla. They stayed together for a season at Subaru and then three years at Ford, prior to moving to Peugeot for 2005.

Park and Martin had five WRC victories to their credit, and were standing in fourth place in the 2005 championship.

Immediately upon learning of the tragedy, Peugeot Sport withdrew their lead car of Marcus Gronholm and Tim Rautiainen. Soon after Gronholm withdrew, the FIA World Rally Championship officials, along with the Wales GB organizers elected to cancel the remaining stages.

"Peugeot Automobiles and Peugeot Sport would like to express their feeling of extreme sadness and deep emotion to the family of Michael Park, known affectionately as Beef," per the statement from Team Peugeot.

The WRC three-peat that crowned McRae the Acropolis master