Medical check-up prior to the World Rally in Germany has sidelined one of the Volkswagen teams. Co-driver Mikko Markkula complained of back pain at the Finnish event.

Andreas Mikkelsen and Mikko Markkula (N/FIN) have had to withdraw from the Rally Germany for health reasons. A diagnosis prior to the start of the Rally Germany revealed that co-driver Mikko Markkula had fractured his seventh vertebra and partially fractured his eighth vertebra, presumably during the Rally Finland three weeks ago. Based on these findings, Volkswagen Motorsport took the decision to withdraw Mikkelsen/Markkula for health and safety reasons. Mikko Markkula had complained of back problems during the Rally Finland, but these had eased off after the rally. However, the pain returned during Monday’s “Recce”. The team decided to send Markkula for an MRI scan, which ultimately confirmed that the Finn would have to withdraw for health reasons. 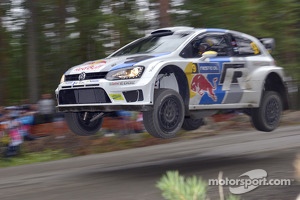 “Safety comes first, particularly when it comes to Mikko Markkula’s health,” said Volkswagen Motorsport Director Jost Capito. “The fractured vertebrae were not easy to diagnose, which is why we took our time to ensure that we made the right decision. It would have been too risky to send Andreas Mikkelsen out with a co-driver, alongside whom he has not driven a single metre prior to the rally and who did not take part in the ‘Recce’. Andreas has changed his style of pace note this season, and Mikko is the only co-driver familiar with them. Unfortunately they must both withdraw from the Rally Germany and are very disappointed. Everyone in the team has their fingers crossed that Mikko will make a speedy recovery.”

Mikko Markkula, Polo R WRC #9 “I suffered severe back pains on the Sunday of the Rally Finland. We assumed it was muscular tension. The pain eased off after the rally, just as the doctors had said it would. However, it has returned over the past few days and I went to see Dr. Johannes Peil on Tuesday evening for a more accurate MRI scan. It was then that we determined I had fractured the two vertebrae. Nobody had considered that possibility, and it was obviously a shock because it meant we would have to withdraw from the rally at the last minute. We are really disappointed. I also feel sorry for the team, for whom we wanted to get a good result at our home rally. I am now hoping to get back to full fitness as soon as possible.”

Andreas Mikkelsen, Polo R WRC #9 “I was very much looking forward to the Rally Germany and am disappointed that we cannot line up at our team’s home event. However, the health of my co-driver Mikko Markkula obviously takes priority. I hope his two vertebrae heal quickly and we can start together in the World Rally Championship again soon. We have worked hand in hand this season to develop what, for me, is a completely new system of pace notes, with which only he is familiar. It was not possible to find a replacement with such little time before the start of the rally. I will now try to support the team as much as possible in other ways. At least we completed the ‘Recce’, so we can call on that information over the coming years.”