'Bruno again! After a long weekend we're at the end of Rally de España, the last round of the 2012 World Rally Championship. Another rally done and another good result for WRC Team MINI Portugal. Both our MINI John Cooper Works Countrymen finished safely and with Chris came home a strong seventh, picking up six more WRC points. 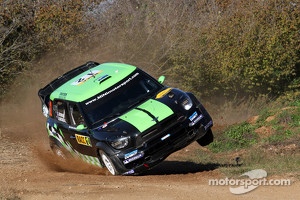 'Rally de España was a tough and unpredictable event. The first day on gravel was especially difficult. The unexpected bad weather made the stages extremely challenging and a lot of drivers had problems along the way. Unfortunately both Chris and Paulo succumbed to the tricky conditions and were forced to retire for the day on SS4 and SS5 respectively.

'Luckily both MINIs only had limited damage and Chris and Paulo were able to rejoin on Saturday with no problems. On the second day of competition the rally moved onto Tarmac. The asphalt stages here in Spain are fantastic and drivers really enjoy them. Chris took some time during the morning stages to get back on track after retiring the day before. He said it was difficult to take the same risks after making a mistake and doing Rally 2. However, on the afternoon loop he managed to find a good rhythm and his times really picked up.

'After finishing day two in 11th place, Chris' aim for today was to try and catch the car in front of him and reach a points scoring position. A consistent drive and the retirements of drivers in front of him made that possible and he was able to climb a couple of positions to finish seventh.

'It's been a pleasure to work with Chris this year. Since he has joined the team for ADAC Rallye Deutschland we've worked well together. I really hope we can continue to work together in future.

'Paulo successfully finished another WRC event and got a bit more experience on Tarmac which he hasn't had too many kilometres on. The water temperature of Porquinho Verde started to rise at the end of SS8 yesterday and he got a power steering problem in the afternoon, but he drove an otherwise trouble free rally. I'm delighted he could proudly wave his Palmeiras flag on the podium once again.

Atkinson 'It's been great working with Paulo again this year. He's a fantastic guy and everyone in the team loves him. He was quite emotional at the last service as he has a busy year ahead of him. He's running for the presidency of Palmeiras football club. I wish him the best of luck, but also hope to see him back in the WRC soon.

'It was a special weekend for everyone at Motorsport Italia, because our sister team Ralliart Italia clinched their third Production car World Rally Championship title. Benny Guerra and Borja Rozada did a great job all season and their reward was well deserved.

'It's been a great year. I'm happy with what we've achieved this season. I want to thank all the team members for their work, passion and dedication. It was a long season, but we always worked as a team and everyone gave 100% at all times.

'Thank you very much for following us during the season, we hope you enjoyed the ride with the team! :-)

'This isn't good bye, it's 'until we meet again'! I'll keep you posted.

Loeb bows out in style in 2012 Rally de Espana finale