Wolfsburg (11 November 2012). In a way it brings back memories of an old adage that says, “When the dress rehearsal flops the premiere will be all the more successful.”

Although the season’s closing event at Rally Spain did not go so well for Volkswagen with the Fabia S2000 cars of the Group’s Škoda brand it is contrasted by a total of eleven class victories in the previous WRC rounds and the eager anticipation of the debut with the Polo R WRC car at Rallye Monte Carlo on 15 January 2013.

On the Costa Daurada, factory driver Sébastien Ogier and co-driver Julien Ingrassia (F/F) were forced to retire at the end of the first day on account of a problem with the drivetrain. 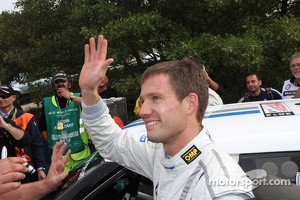 Due to an accident Andreas Mikkelsen and co-driver Ola Fløene (N/N), the champions of the intercontinental Rally Challenge (IRC), finished the total of 1,391.73 kilometres in 21st place according to Rally 2 Regulations.

Before the start of “Monte”, tests in Mexico, France and Sweden are still on the agenda for the Volkswagen team.

“For us, the season was intended to be a year of learning from the very beginning. Overall, after twelve rallies and more than 4,500 kilometres of special stages, we can make a positive assessment,” says Volkswagen Motorsport Director Jost Capito.

“We achieved what we were aiming for – that is for the entire crew to learn the processes in the World Rally Championship.

On top of that, our rally racers proved their driving skills on numerous occasions, first and foremost Sébastien Ogier, who clinched ten class victories.

But I’m very pleased with our Volkswagen Juniors as well. I’ve got the fullest confidence in the team and am sure that we’re optimally prepared for 2013.”

After a tremendous ceremonial start in front of the famous cathedral in Barcelona the drivers were in for difficult, slippery track conditions around the small coastal town of Salou the next morning.

Sébastien Ogier as well as Andreas Mikkelsen set a strong pace on the first special stage. Both managed to minimise the gap to the more powerful WRC cars.

Afterwards, though, misfortune took its course on the second special stage (SS): First, Ogier lost valuable time because the bonnet of the Fabia lifted after running over a bump in the road.

Shortly afterwards Mikkelsen was struck, who like rivals Petter Solberg and Thierry Neuville hit a stone with full force – resulting in suspension damage.

In the evening, shortly before the start of SS6, Ogier/Ingrassia had to park their car with a drivetrain problem, which meant the end of the rally for them.

Only Mikkelsen, after a successful repair, was able to finish the remainder of the rally under the so-called Rally 2 Regulations and, by setting consistently fast times, gathered valuable experiences for 2013.

“At ‘Monte’ at the beginning of the year we crashed and now at the season finale we had technical problems. Other than that, the season went superbly,” said Sébastien Ogier expressing his satisfaction with his first year for Volkswagen.

“And, honestly speaking, I’m also proud of ten class victories. Whenever we saw the finish we were the quickest S2000 car. But I’m also glad that the year of transition is over.

Now I’m incredibly excited about the beginning of the hot phase with the Polo R WRC – and about being able to compete with the top-flight drivers again at Rallye Monte Carlo.”

Volkswagen Junior Andreas Mikkelsen, who has got perfect chances of driving a Polo R WRC in 2013 alongside Ogier and new signing Jari-Matti Latvala, assesses the season in a positive light as well. “For me, it’s been a brilliant year.

Of course I’m proud to be the first driver in history to have defended my IRC title,” says the pleased Norwegian.

“And the year with Volkswagen was enormously important for me as well. Driving in such a large team and getting to know the processes was completely new to me.

I’m happy that I received good feedback from the team and very much hoping to become the third WRC driver in the Volkswagen team next year.”

The latest episode of the Michael & Kimi show