Mitsubishi Motors Corporation ("MMC") today announces that the Marlboro sponsorship of the Marlboro Mitsubishi Ralliart team would cease at the end of the 2002 FIA World Rally Championship season. The decision was taken mutually between Mitsubishi ...

Mitsubishi Motors Corporation ("MMC") today announces that the Marlboro sponsorship of the Marlboro Mitsubishi Ralliart team would cease at the end of the 2002 FIA World Rally Championship season. The decision was taken mutually between Mitsubishi Motors and Marlboro, both of whom feel the time has come for the two organisations to move in different directions. Marlboro has been the principal sponsor of the team since the beginning of the 1999 season. 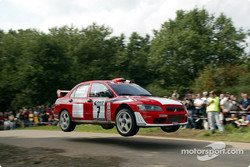 Fran?ois Delecour.
Photo by Mitsubishi Motors.
Commenting on the announcement, Andrew Cowan, Team Chairman, says "Through its WRC team, Mitsubishi Motors and Marlboro have worked together very closely over the last four years and have enjoyed much success during that time. However, we now feel that the time has come to move on and we wish them well for the future ." He adds : "This new direction will give us the possibility to help building further direct awareness for the Brand through motor sports, at a time where it is being revisited and revitalised ".

Describing the new spirit and attitude at Mitsubishi Motors through the very motor sports oriented " Speed - Passion -- Commitment -- Teamwork " analogy, at this year's Geneva Auto Show, Rolf Eckrodt -- President and CEO of MMC emphasized indeed the sport as an essential element of MMC's Brand and Corporate Turnaround strategy, be it WRC or Cross Country.

Mitsubishi Motors has been involved in motor sports since 1962 and is one of the most successful manufacturers of all time, with four drivers WRC titles and one manufacturer WRC title in the last six years. In Cross Country, Mitsubishi has won Paris-Dakar seven times and four world titles. And with machines like the road legal Lancer Evolution VII or just revealed concept car-turned cross country racer MPR10, it is more than ever committed to success in motor sports.

The Marlboro Mitsubishi Ralliart team will continue business as usual for the remainder of the 2002 FIA World Rally Championship, which culminates with the Rally of Great Britain on November 15-17.