Mixed emotions for M-Sport in Monte

Bryan Bouffier secured a sensational second place, Elfyn Evans 6th, but however, Mikko Hirvonen did not finished due to an electrical issue.

There were mixed emotions for M-Sport as Rallye Monte-Carlo came to a close today. Bryan Bouffier secured a sensational second place behind the wheel of an M-Sport run Ford Fiesta RS WRC and Elfyn Evans got his FIA World Rally Championship (WRC) campaign off to a flying start with sixth place on his Monte debut. Elsewhere however, there was disappointment for Mikko Hirvonen as his Ford Fiesta RS WRC developed an electrical issue on the final stage – relegating the Finn from the overall results.

This year’s event has seen some challenging conditions, and as the crews ventured south to Monaco, the final day was to be no different. As one of the WRC’s most legendary stages, ‘Col de Turini’ is one which rarely fails to excite, and this year’s offering certainly achieved that.

With full snow over ‘the Col’ for ‘La Bollene Vesubie – Moulinet’ and streams of running water for the high-speed ‘Sospel – Breil sur Roya’, the final loop of stages were amongst the event’s most daunting. But that was not to faze Evans and co-driver Daniel Barritt as the British duo equalled their best performance on what was their maiden outing at the season’s traditional opener. 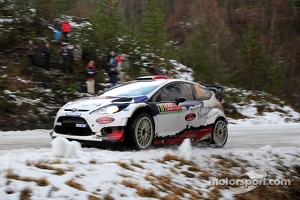 Taking to the wheel of the Ford Fiesta RS WRC, the Welshman was one of the event’s most impressive contenders. Keeping his head where the more experienced faltered, Evans showed the determination which will see him go far in years to come. Gaining a wealth of invaluable experience through the treacherous speed tests, the 25-year-old also demonstrated flashes of brilliance – with a fourth fastest time on SS11 and being just 0.5 seconds shy of a WRC stage win on SS3.

Unfortunately, there was less good fortune for the sister M-Sport World Rally Team Fiesta RS WRC of Hirvonen and co-driver Jarmo Lehtinen. In what had been a difficult transition back to their former team, the Finns had to adapt in less than ideal circumstances. Upping the pace as the event ensued, the Finn was on course for a strong sixth place before an untimely electrical issue put pains to his efforts on the final stage. He and the team made every effort to get the Fiesta back to service. Determined to the last, Hirvonen even removed the windscreen to improve visibility in the lashing rain having lost power to the wipers. Regrettably, it was not to be. As his hard work went unrewarded, Hirvonen had to accept some good mileage in difficult conditions as his only consolation.

The Finn now focusses his attention on a successful Rally Sweden – an event on which he has previous good form having claimed victory with the team in 2011.

“I’m absolutely delighted to have made it to the finish in such a strong position. Obviously it is very disappointing for Mikko [Hirvonen], he and Jarmo [Lehtinen, co-driver] helped us a lot this weekend and sixth place should have gone to them.

“We managed to keep our noses clean all event – no moments, no dramas, no big slides. To drive round a tricky event like this, like we did, it is a big achievement for us and it fulfils everything we wanted from the weekend.

“There are a lot of people who made it all possible – the ice note crew being one, the team being another. It was a big step to come into a squad like this, and with a top car for my first outing on the Monte, so a big thanks to Malcolm [Wilson] and the team for the opportunity.”

“It’s been a frustrating weekend. We struggled to get back to grips with the Fiesta [RS WRC] in the early stages, but the pace was coming so it is a real shame that it had to end the way that it did. Now, I just need to focus on the next event. Sweden is a rally that I enjoy, so hopefully we’ll be able turn it around and really show our potential.”

“It’s been a fantastic start to Elfyn’s [Evans] WRC campaign and he richly deserved this sixth place finish. He has coped well in one of the most difficult Montes for number of years and it sends out a strong message that he has a great career ahead of him.

“Obviously it was a huge disappointment to lose Mikko [Hirvonen] with an electrical problem on the final stage. He and the team tried hard to get the car back home, but unfortunately it was not to be.

“On the positive side, he managed to get a lot of mileage in what were far from easy circumstances. Hopefully he will be to put this weekend behind him and prove his true pace at Rally Sweden next month.” Bryan Bouffier and Xavier Panseri secured a well-deserved second place behind the wheel of an M-Sport run Ford Fiesta RS WRC today. Constantly challenging the front-runners throughout the event, Bouffier set a string of competitive times – including two stage wins – and proved the performance of M-Sport’s top-specification Fiesta.

“I have to say that before the start of the rally, it was my dream to finish on the podium. To have actually achieved it is a fantastic feeling and truly surpassed my expectations.

“It was a pleasure to battle for the lead. On some stages were really pushed and it was great to see that our pace was strong enough to challenge.

“This is my first WRC podium on my first time with the Fiesta [RS WRC]. I need to thank my co-driver and my entire team because without them, this result would not have been possible.”

“It has been an absolutely superb drive from Bryan [Bouffier] from start to finish. To finish in second place at Monte – on his first time with the Fiesta [RS WRC] – shows that he has real potential and I hope that we can find a way to get him back behind the wheel as the season continues.”

This is why Sébastien Ogier won the Rallye Monte Carlo - video