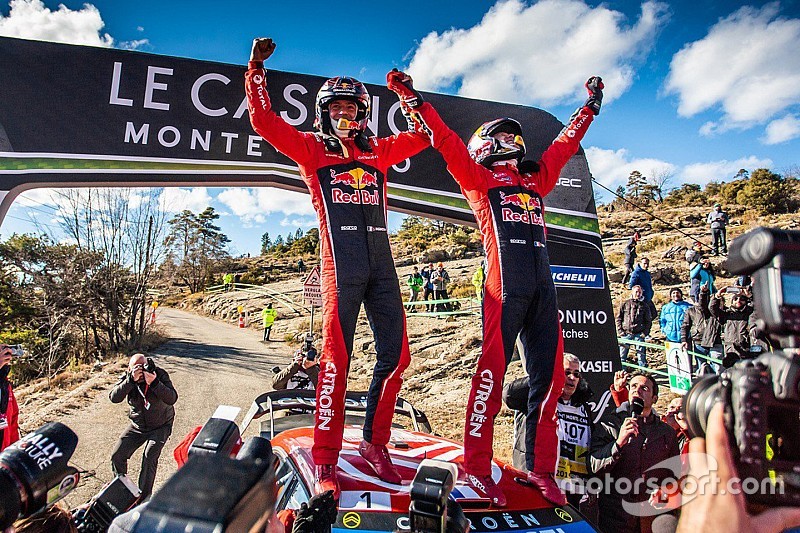 Making his first start since rejoining Citroen for 2019, Ogier took the lead on the second of Friday afternoon's three stages and did not relinquish it thereafter.

But that did not represent how close the battle between the six-time champion and chief rival Neuville was, with the Hyundai driver never more than 5.8 seconds in arrears on Saturday or Sunday.

Ogier consolidated his lead on Saturday, but Neuville started the final day of action strongly by slashing 1.1s from of an overnight deficit of 4.3s on the morning loop.

A stage win by 2.8s on the penultimate test set Neuville up for a final-stage attack against Ogier, who encountered a throttle issue on SS14 and SS15 that was reported to have been fixed before the final La Cabanette-Col de Braus powerstage.

Neuville started the stage just 0.4s behind the rally leader and was 1.5s up on Ogier at split two, but the Citroen driver took control from there - eventually recording the second-fastest powerstage time to seal victory by 2.2s.

The win is Ogier's seventh on the Monte Carlo Rally and sixth in a row.

Early rally leader Ott Tanak salvaged third place with a storming run on Saturday and Sunday, having dropped to seventh when he was forced to change a puncture on SS7 on Friday afternoon.

By the end of the first day proper of the rally Tanak was more than two and a half minutes behind Ogier, but he won all four stages on Saturday, ending the day fifth - after Andreas Mikkelsen and Elfyn Evans retired - and within 20s of a podium place.

Another stage victory on Sunday left Tanak just 5.7s shy of Sebastien Loeb, with a sixth-straight fastest stage time on SS14 hauling him up to third ahead of the squabbling Loeb and Jari-Matti Latvala.

Neuville's fastest time on the penultimate test ended Tanak's streak of stage wins, but he still pulled clear of the pursuing pair to seal third.

Loeb stormed to two stage victories on Friday - both on the 14.94-mile Roussieux-Laborel test - thanks to an inspired tyre choice, and a consistent run on Saturday meant he ended the day in the top three.

But there was no landmark podium on his first WRC start for Hyundai, as he fell away from Tanak on the final three stages and instead consolidated his advantage over Latvala.

Kris Meeke ended up sixth in his Yaris, but his eventual deficit of 5m36.2s to Ogier was not an accurate reflection of his pace.

On his first start for Toyota, Meeke was second after Thursday evening's first stage before a puncture dropped him to fourth.

Meeke's position in the middle of the pack fluctuated on Friday afternoon but he had just climbed up to sixth when a wheel-rim issue struck, costing him more than three minutes in one go.

That ended his realistic hopes of a sizeable points haul, but Meeke kept his Yaris on the road for the remainder of the event and bagged sixth - picking up an additional five points for winning the powerstage.

The rally was a hugely disappointing one for the M-Sport Ford squad, with all three of its drivers hitting trouble.

Evans had been running solidly in the points but dropped his Ford Fiesta WRC off a steep bank and into a tree on SS10 after running wide through a fast left-hander.

Teemu Suninen crashed on the first stage but recovered to 11th, while Pontus Tidemand was cautious with his pace on his return to the WRC class either side of retiring on Friday with a wishbone failure.

With Hyundai driver Mikkelsen also retiring on Saturday after clattering a wall when he took the final corner on SS9 flat-out, which ripped his left-rear wheel away, leading WRC2 Pro runner Gus Greensmith scored seventh in his R5 M-Sport Ford Fiesta.

Greensmith's had a clear run in the WRC2 Pro category for the majority of the rally after Skoda driver Kalle Rovanpera went off on Thursday's opening stage, but still finished a convincing 51.9s clear of the next runner in the class.

Analysis: Why V8 Supercars drivers are choosing part-time over full-time