Peugeot bring home points on Monte Carlo rally. Both Richard Burns and Marcus GrÃ¶nholm have scored manufacturer points for Peugeot on the opening round of the 2003 World Rally Championship in Monte Carlo. By finishing fifth, Burns has also opened ...

Both Richard Burns and Marcus Gr?nholm have scored manufacturer points for Peugeot on the opening round of the 2003 World Rally Championship in Monte Carlo. By finishing fifth, Burns has also opened his account of driver points. 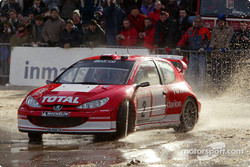 Today's last leg consisted of four stages, including two runs over the classic Col de Turini. Conditions on the Col varied enormously, so every tyre choice was inevitably a compromise.

"The tyre we chose was quick on the dry sections, but it struggled for grip on the ice and snow," said Burns. "Nonetheless, I'm happy with the final day as there was no point in pushing especially hard. I've never finished higher than fifth on the Monte Carlo Rally before, so I'm satisfied with our result. The car has once again been reliable, and well-suited to all sorts of conditions."

Marcus Gr?nholm started the day 15th, after losing the lead yesterday with a broken steering arm. But the Finn fought back to finish 13th at the end, adding to Peugeot's manufacturer points tally. "Today was a difficult day for me, as I was very disappointed to lose the lead. We certainly had the chance to win. But now my task was to score points for Peugeot, and I am happy we have done that. Tyre choices were very difficult to make today, as the conditions were very mixed. Monte Carlo is not my favourite rally!"

The third Peugeot 206 of Gilles Panizzi retired yesterday as the driver was feeling unwell.

Peugeot team principal Corrado Provera commented: "First of all I would like to congratulate Citroen for achieving something in their first full season that we have not achieved in four years of trying! Obviously, we cannot be satisfied with our own result. But looking on the positive side, the cars were extremely reliable and fast in all conditions. Now we must look forward to the Swedish Rally. Because if there is a rule that says Peugeot must lose the Monte Carlo Rally for the fourth time in a row, then there has to be another one that says Peugeot must win Sweden for the fourth time in a row!"

The two Bozian-run privateer Peugeots of Cedric Robert and Roman Kresta finished sixth and 10th respectively. Team Director Jean-Pierre Nicolas congratulated both privateer crews and added: "Cedric's performance has been excellent. We must see now if we can find some rallies to put him in a works car."