It has been three years since the FIA World Rally Championship competed in Monte Carlo and the event has been missed by not only the Citroen ace, Sebastien Loeb, but by the other drivers who have taken on the challenge of the possible snow and ice rally event. The Frenchman and his co-driver Daniel Elena are very happy to have the historic event back on the calendar; especially since they have taken the victory five times in Monaco.

“For me, it’s a no-brainer: the Rallye Monte-Carlo has to be in the World Championship,” said Loeb. “It is the world’s most famous rally; you just can’t have a world championship without it! It’s also a rally where I have always done well. The roads are very enjoyable to drive and there is always a great roadside atmosphere for the special stages. And let’s not forget this is Daniel’s home rally. I’m sure he’d rather be on my right in the DS3 WRC than behind the wheel of a DS3 R3 like last year!”

This is a classic rally.

Mikko Hirvonen is now with the seven-time championship Citroen team. The main rival to Loeb for the title fight and his co-driver Jarmo Lehtinen will now take on their first contest with the French manufacturer starting on Wednesday, January 18th and covering 430km in 18 stages. The actual event starts in the homeland of Citroen in Valence. The Finns move to Citroen was unexpected and Hirvonen commented, “I see this opportunity to work with Sebastien as being of great benefit to my career.”

The Finn added, “We all start the season with no points on the board and the 2012 regulations will make racing fairer, both for team-mates and rival drivers. To some extent, it’s fairly natural that the team expects more of Sebastien; he has been with them for ten years and has been World Champion for the last eight years running! That takes a little bit of the pressure off me, so I’ll be able to take the time to become totally accustomed to the car, the team and how it operates. In any case, I always try to adopt a positive approach to situations, as that tends to be the best way to make progress.”

Ford’s team is also ready for the Monte Carlo rally. With a new look for the Fiesta RS they also have a “new” driver on their team for the 2012 season. Jari-Matti Latvala was promoted to being the team leader. The Finn and his co-driver Miikka Anttila are ready for their new role and the first event of the new season. “I feel I’m more competitive on asphalt than ever,” said Latvala, the winner of four Monte Carlo rallies. “All the pieces are there for a successful year – a strong team, a competitive car and two good drivers. We need to put them together for the entire season, and if we do that then we can fight for the manufacturers’ and drivers’ world titles. I’ve driven a Ford for several years, but this season I believe we have the best chance of winning.” 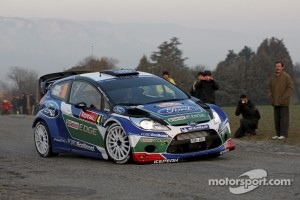 The “new” driver is one who was driving a Citroen last year. Petter Solberg and his co-driver Chris Patterson are now with the Blue Oval team. The now-former privateer team owner over the past three years returned to the Ford camp where he got his start in the WRC. “My first test was in difficult conditions and I quickly developed a good feeling,” he said. “I competed there last year, when it wasn’t a WRC round, so I know all the stages except the two new ones. I enjoy the rally, although the conditions can be tough. There are no real difficulties if it’s dry, but if it’s wet we can expect black ice and snow. Managing tyre choice in such circumstances requires a good team set-up, with a strong strategy and access to the most-up-to-date weather information,” he said.

The Norwegian was with Subaru when he notched the 2003 WRC title and is looking forward to his to his and Patterson’s 100th WRC start. “Coming back to Ford is exciting and the chance to drive for a manufacturer again is why I ran my own team for the last three seasons. I’m not here just to make up the numbers. Jari-Matti and I want to fight for titles and I believe we can,” Solberg said.

The MINI team ran a limited “test” schedule last year but back in the 1960s’, the Mini-Cooper S took victories in the Monte Carlo rally. Daniel “Dani” Sordo, who proved that the MINI was ready last year returns with co-driver Carlos del Barrio in the MINI John Cooper Works rally car with two podium finishes. This will be Sordo’s 91st WRC start.

I am happy with the car.

“This is a rally I like very much as the stages are really nice. I can’t remember exactly how many times I have done it, but it could be three times. We have been testing and that has gone very well, so I am happy with the car. The most important thing is to do tyre testing and we have been able to do this with Michelin, so I know we have some very good tyres. The issue will be the conditions as at the moment it is dry with very little snow. However, this can change very quickly,” Sordo said.

New to the MINI team will be two Frenchmen with Pierre Campana and his co-driver Sabrina de Castelli. However, they are not new to the MINI as they contested the French championship and a few of WRC events last year. “I am thrilled to have been selected by MINI to join its squad for Monte Carlo following our achievements last year. It is a rally I know well and enjoy. I won the 2WD class last year, so I am pleased to bring my experience and to showcase my abilities on such a competitive event,” said Campana

Sebastien Ogier will be taking on the Monte Carlo challenge but for now in the SWRC class with two Fabia S2000s. Ogier and co-driver Julien Ingrassia are heading up the program for the 2013 entry for Volkswagen. In the second Fabia for the team will be Dutch driver Kevin Abbring and his co-driver Lara Vanneste. The German manufacturer will campaign the WRC next year with their Polo R car.

Volkswagen Motorsport Director Kris Nissen said, “After Sebastien’s impressive victory in December as a Volkswagen factory driver at the Race Of Champions we are very much looking forward to finally contesting our first joint rally. ‘Monte’ is the mother of all rallies in general, which makes it a great place for this premiere. With its changeable conditions of asphalt, ice and snow, it’s one of the most challenging events on the calendar. And even though we’re not competing for championship points this season we’ll naturally be giving our best at each run.” 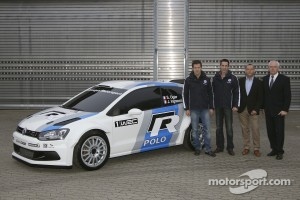 This year’s season opener not be an easy and while the competitors concentrate on the their navigation and their driving skills, the photographers and spectators will no doubt enjoy historic monuments, inducing the Col du Turini, as the rally progresses from France to Monaco via Ardeche, Haute-Poire, Vercors and of course the Alpes-Maritimes region.

What will be important is tire choice and that may prove to be difficult at times as the weather will play a factor over the five days. There may be times they will be racing on dry or wet asphalt roads instead of the icy or snow-filled roads as the weather can be unpredictable which makes it that much difficult to pick the right tires. They have to make their decision before the first stage of the day and cannot change tires until the allowed mid-stage service.

Ford’s Latvala said, “This is a classic rally. It’s challenging and stressful in equal measure. You have to think about the weather and tyre choice. When we’re in the service park at sea level in Monte-Carlo, we must predict what the weather will be like in the mountains at 1200m and make a selection accordingly. A wrong choice can cost several seconds per kilometre, so it can win or lose the rally,”

Loeb and Elena storm into the early lead in Monte Carlo