Competing in the Qatar World Rally Team’s Citroën DS3 WRC, Thierry Neuville and Nicolas Gilsoul finished Rally Italia outside the points. After going off on day two, the Belgian still feel that they have learned a great deal about the Sardinian stages. 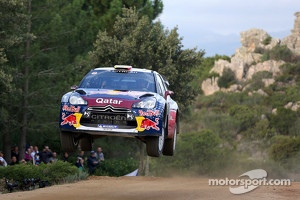 Renowned for featuring stages that are often rocky and narrow, Rally Italia Sardegna was made even more difficult this year by the variable weather conditions, which forced the competitors to keep switching between soft and hard Michelin Latitude Cross tyres.

After just missing out on a place on the podium in Alsace, Thierry Neuville had hopes of going one better here. The rally got underway on Thursday evening with two runs on a stage of around thirty kilometres.

Running in tenth position, the Belgian enjoyed a very clean racing line: “That helped us to get among the front-runners. I was pretty cautious on SS1 and then I pushed a bit harder on the second run. Although I was slightly hampered by the fading light, I set a fairly good time.”

Having ended Thursday in fourth overall, Thierry made a less impressive start to the second day. “I made a mistake on SS3. I wasn't sufficiently focussed and I misinterpreted one of the pace notes. We clipped the verge and the car ended up lying on its side.

We managed to turn it back over with some help from two stewards, but I burned my hand in the process.”

After losing six minutes as a result of the incident, Thierry retired for the day: “The engine had lost a lot of oil when the car was on its side, so we felt it was better not to take any risks and avoid breaking it altogether.”

After the mechanics and the doctors took care of the DS3 WRC and Thierry’s fingers respectively, the Qatar World Rally Team were able to return to the action on Saturday morning.

“First of all, I must thank the doctors, because without them I wouldn’t have been able to get back in the car. We learned a lot today. This morning, we were one of the first crews on the road and there was a lot of sweeping,” said Thierry.

“We worked a lot on the set-up to adapt the car to the conditions. I felt that I made clear progress on the second loop; we set three top 5 times in the afternoon.”

Thierry made it to the end of the rally after the two short stages making up Sunday’s final leg. He picked up one World Championship point by finishing third in the Power Stage.

“Obviously, the final outcome isn’t what I was hoping for, but I can only blame myself for that,” he concluded. “Like after every rally, I feel slightly better equipped for the future. I really need to finish the season on a high note.”

Competing in a Citroën DS3 WRC, the Italian Luca Pedersoli collected the point for tenth place. “It was a great honour to be able to drive such a fantastic car,” remarked the 2004 European Championship runner-up.

“The weekend was difficult for several reasons: I hadn't driven on gravel for several years, I had virtually no experience of the car beforehand and I’m not used to only doing two runs in recce.

I wasn’t very quick, but I kept out of trouble and I'm pleased to have made it to the end without making any mistakes. Finishing in the top 10 is a great bonus!”