More spills than thrills for Citroën

"“I misjudged how slippery the road surface was on a corner"

Citroën Racing had a tough second day at the Wales Rally GB as first Robert Kubica and then Mikko Hirvonen were forced to retire after going off the road. In contrast, Dani Sordo and Carlos del Barrio produced a flawless display, enabling them to bounce back in spectacular fashion, climbing to ninth place in the overall standings! 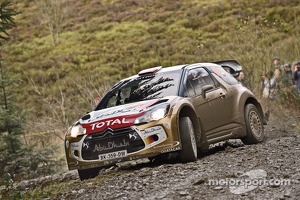 Hafren, Sweet Lamb and Myherin: the three stages contested today at Wales Rally GB are some of the event’s biggest classics and have been part of the rally for several years. After leaving Deeside early this morning, the crews completed a long road section before tackling SS4.

The first drama of the day involved Robert Kubica. Despite his cautious approach, which had enabled him to end the first leg in seventh overall, the Pole was caught out by a change in grip: “I misjudged how slippery the road surface was on a corner. The front wheels locked up on braking and we slid wide; we ended up rolling into the ditch by the side of the road. The car wasn’t badly damaged – the windscreen wasn’t broken – but there was no way we could’ve got the car back onto its wheels and out of the ditch by ourselves.”

The Citroën camp’s spirits were lifted when Dani Sordo set the fastest time on the Sweet Lamb stage. The Spaniard looked on course to repeat the feat on Myherin, but he eased off quite a bit when he saw Mikko Hirvonen’s DS3 WRC parked in the middle of the stage. “It came from a mistake in the pace notes on a long, flat corner in sixth that tightened to fifth gear. Jarmo didn’t say that it tightened so I just kept sixth gear, flat out, and then it was too late,” explained the mud-covered driver. “We slid wide, then flipped upside down and the windscreen broke as soon as we hit the roadside bank. The inside of the car is completely full of mud and stones…”

After analysing the condition of the DS3 WRC, the Citroën Total Abu Dhabi WRT and the Finnish crew decided not to try and rejoin the race under Rally2 rules. Robert Kubica and Michele Ferrara should however be back in action tomorrow.

Somewhat isolated in the standings at the remote service in Newton, Dani Sordo was pretty pleased with his morning: “After making a cautious start, I gradually felt more and more confident. As it isn’t raining, the level of grip is pretty good. It is still difficult to judge how slippery it’s going to be on the really muddy corners. I’m pleased to have set the fastest time on Sweet Lamb – it’s a stage that I really like.”

On the second loop, the Spanish crew continued their race at strong pace, regularly setting times close to those of the leaders. This series of strong performances meant they moved up the standings, ending the second leg ninth overall: “I am most all happy to have found a good pace and to be quick on a surface which in theory doesn’t really suit me. I hope to keep it up on the last two legs.”

Neuville and Evans remain on target in Wales

Ogier leads in Wales with one day to go

Neuville: Everything must be “on point” for Ypres WRC victory repeat

Rally Belgium hot favourite Thierry Neuville admits everything will need to be “on point” to be competitive when the World Rally Championship heads to his home event in Ypres this weekend.

WRC Rally Belgium: Everything you need to know

The World Rally Championship heads to the asphalt roads of Ypres Rally Belgium this weekend, with Toyota’s Kalle Rovanpera facing a slim prospect of wrapping up the title.

Third generation driver Max McRae is working hard towards stepping up to the Junior class of the World Rally Championship next season, following a test in a JWRC car.