Having driven M-Sport’s Ford Fiesta R5 at the head of the field on last weekend’s Geko Ypres Rally, Thierry Neuville was full of praise for the company’s latest challenger after completing all 19 stages as part of the FIA European Rally Championship.

Partnered by regular co-driver and fellow Belgian Nicolas Gilsoul, the pairing have extensive knowledge of their local event – a fact made all the more apparent by their impressive performance on the specialist stages. The conditions suited the duo perfectly as they piloted their Fiesta R5 to what would have been 16 fastest times from a possible 19 stages.

Despite a couple of ‘offs’ and having caught the zero car on occasion, Neuville and the Fiesta R5 remained in a class of their own. Were it not for a puncture on SS14 which lost the youngster some three minutes, his time would have been good enough to secure the rally win by an impressive two minute advantage. 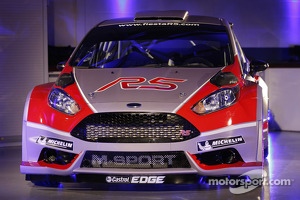 Based on the new 1.6-litre EcoBoost-engined Ford Fiesta ST road car – Ford’s fastest-ever production Fiesta which went on sale earlier this year – the Fiesta R5 rally car forms the latest step on Ford and M-Sport’s ‘Ladder of Opportunity’ and Neuville was suitably impressed with the partnership’s latest collaboration.

But Neuville clearly isn’t the only driver impressed with the performance of M-Sport’s latest rally car. With more than 20 deposits already placed, it is likely that the Fiesta R5 will make a return to the stages – this time in competition – with M-Sport customers towards the end of the month.

“The car is really impressive. In terms of chassis and brakes, you can compare it to a WRC car although the engine is, of course, not the same and you have only five gears. It is a really driveable car and good fun too! For regional championships like the ERC [FIA European Rally Championship], it is perfect – less expensive than a Super 2000 or Regional Rally Car, but still very competitive.

“You can also adapt really quickly to this car and it’s easy to set quick times because you have the benefit of a good set-up and therefore more confidence straight away. It’s a great car for a driver who wants to prove their speed and I think the FIA have done a great job with the regulations of this new class.”

Today, M-Sport announced that the customer cars have also gone through the homologation process.

“It is fantastic to see the first cars completed and on their way to the customers. This project has been two years in the making, and to see it all coming together is very satisfying indeed. Everyone involved – from the designers and engineers, to the technicians in the workshop – have done a great job and I think this new model is something the entire company can be proud of.

“Needless to say, I am very much looking forward to watching our customers’ progress with the [Ford Fiesta] R5 – and hopefully securing victories around the globe.”

A number of Fiesta R5s are also already apparent on the Neste Oil Rally Finland entry list – eighth round of the FIA World Rally Championship – where the car will make its debut at the pinnacle of the sport. Robert Barrable, Eyvind Brynildsen and Qatar M-Sport World Rally Team’s Elfyn Evans just some of the names expected to line up behind the wheel of M-Sport’s latest challenger in Jyväskylä next month.