Qatar World Rally Team’s Thierry Neuville was forced to forfeit the lead of Rallye de France-Alsace today. Having led the field for much of the event, the Belgian picked up an unlucky puncture which ultimately deprived him of his place at the top of the time sheets.

Despite an inspired drive, Neuville ended the day in fifth place with the Qatar M-Sport World Rally Team pairing of Evgeny Novikov and Mads Østberg in sixth and eighth places respectively. 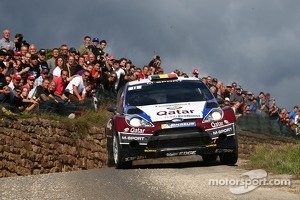 Going into the rain-soaked morning stages, there was no doubt over tyre choice with all the Qatari Ford Fiesta RS WRCs clad with Michelin’s softer rubber. Anticipation was high as yesterday’s superb team performance gave Neuville a 9.9 second advantage going into the penultimate day. Indeed the Belgian was well and truly in the hunt for a maiden FIA World Rally Championship (WRC) victory, but regrettably it seems not to be.

Partnered by compatriot Nicolas Gilsoul, the day could not have got off to a better start for Neuville. Looking at ease behind the wheel of his Fiesta RS WRC, the Belgian had increased his lead to a healthy 16.6 seconds come the close of SS10.

Yet as the rain clouds reformed for the afternoon loop, disaster struck. Sliding wide into a high-speed, right-hand junction, the 25-year-old picked up a puncture. Opting to drive the remaining 20 kilometres, he lost over a minute and a half to the chasing pack. Left to lament on what might have been, Neuville ended the day in fifth place.

Novikov on the other hand enjoyed a trouble-free day. Upping his pace and consolidating a strong sixth position, the Russian had the edge over rival Mikko Hirvonen. Partnered by co-driver Ilka Minor, the Muscovite will be looking for another clean run tomorrow – ready and eager to push his Fiesta RS WRC up the standings should an opportunity arise.

Østberg and co-driver Jonas Andersson were also enjoying a better run behind the wheel of their Fiesta RS WRC. Continuously building his knowledge of the sealed-surface event, the Norwegian took his rally step by step. Improving his driving, the times followed suit, and Østberg climbed up to eighth place through the course of the day.

Elsewhere, in WRC 2, Elfyn Evans found himself in a similar position to team-mate and former rally leader Neuville – ruing what could have been were it not for yesterday’s time loss. Indeed the Welshman set the fastest WRC 2 time on all but three of today’s speed tests.

Finding the perfect set-up for their Ford Fiesta R5, Evans and co-driver Daniel Barritt looked supremely confident on the French asphalt – finishing the day in a strong second place.

Thierry Neuville (5th) said: “Of course I am disappointed as we were having a really good rally, but these things happen. We got a puncture after we hit a kerb on SS11. Then we had to drive 18 kilometres with no air in the tyre. It was good that we didn’t lose too much time, but unfortunately too much to fight for the victory.

“Tomorrow, we just need to stay on the road and follow the battle in front. I am sure that a lot of things can still happen in the difficult conditions. Like we saw last year, there could be a lot of standing water on these stages so it is not over for sure. It will be difficult to get back on the podium, but as we have seen already this year, nothing is finished until you are at the end of the rally.”

Evgeny Novikov (6th) said: “It’s been an OK day. We have no need to take any unnecessary risks, so we have just been continuing to build the speed whilst maintaining the same level of confidence. I am quite happy with our driving in these difficult conditions, so it certainly wasn’t a bad day by all means.”

Mads Østberg (8th) said: “We have done what we wanted to do today – increased the speed and got closer to the fastest drivers. Throughout the day we have upped our performance and I am feeling more and more confident. Tomorrow, we just need to try and continue like this and keep making progress.”

Elfyn Evans (2nd in WRC 2) said: “All in all it’s been a good afternoon. The first stage of the loop [SS11] was very good for us again. There were just a couple of places on the other two [SS12 and SS13] where we were perhaps a little over cautious. But on the whole, it’s been a promising day. The car has been perfect and everything is moving in the right direction.”

Team Principal, Malcolm Wilson OBE, said: “It was a great start to the day for Thierry [Neuville] in what were very difficult conditions. He increased his lead over his nearest rivals and once again proved just how much he has developed this year.

“Sadly, he picked up a puncture on SS11. Considering that he then had to drive almost 20 kilometres on the tyre, he lost a lot less time than we were expecting. Unfortunately, it has put him out of contention for the victory.

“There’s an incredible battle at the front with the top four guys separated by just five seconds, and it is encouraging that we were well ahead of that battle before the puncture.

“Obviously it’s a great shame that Thierry and Nicolas [Gilsoul, co-driver] lost out on what could have been a first victory [in the WRC], but the tremendous pace of Thierry, Nicolas and the Fiesta [RS WRC] only goes to show that it is not far away.”