© 2021 Motorsport Network. All rights reserved.
TV Tickets Fashion Giorgio Piola Jobs
Previous / Citroen made it through the longest day in Italy Next / A cool result in hot conditions: Ogier and Volkswagen in the lead in Italy
WRC Leg report

Neuville holds podium position after day one in Sardinia

Like most of their competitors, the M-Sport Ford Fiesta drivers had a rough day in Rally Italia Sardegna. 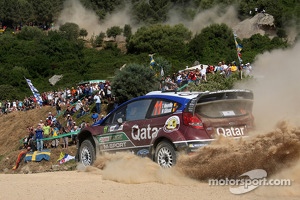 Proving that they have the pace as well as the consistency, the Belgians clearly have a taste for podium finishes of late. Starting cautiously, they soon found their confidence. So much so in fact that they flew from sixth to third over the day’s 147.12 kilometres – a near-perfect set-up on their Ford Fiesta RS WRC and improved pacenote system accounting for their impressive form. Using the first loop to double check the notes, they showcased their true pace over the second pass.

With just 3.1 seconds standing between Neuville and second place, tomorrow’s final day will see Belgium’s latest protégé on the hunt for his best ever result in the FIA World Rally Championship.

In the fellow Qatar World Rally Team Fiesta, Elfyn Evans was also putting in a sterling performance. Starting cautiously on his debut with M-Sport’s top-specification Fiesta, the Welshman continually improved his performance. His showing was all the more noteworthy given that this is his first venture to this notoriously difficult and unforgiving event; not to mention his first outing with the voice of Giovanni Bernacchini behind the notes.

Keeping his head, the Welshman lies a creditable ninth place going into tomorrow’s final stages – something he will be keen to hold onto for a points paying finish on his world rally car debut.

Despite suffering from an inflamed throat, Mads Østberg was also impressing behind the wheel of his Qatar M-Sport World Rally Team Fiesta RS WRC. Admittedly struggling to keep focused on the tricky, technical stages over the morning loop, the Norwegian’s determination and out-right pace was paying dividends. Partnered by Swedish co-driver, Jonas Andersson, the duo rarely found themselves outside of the top-five fastest crews. Lying fourth at the end of SS7, Østberg was in a tight battle for second place with Hirvonen and Neuville. But disaster was to strike the Norwegian on the final stage of the day [SS8]. Succumbing to the slippery conditions of the night stage, Østberg rolled his Fiesta RS WRC on a deceptive left-hand corner after a crest two kilometres into the ‘Gallura 2’ test. The team are currently recovering the car and will later assess whether or not the car will be able to restart under Rally 2 regulations tomorrow.

There was similar misfortune for the fellow Qatar M-Sport World Rally Team Fiesta of Evgeny Novikov and Ilka Minor. Eager to showcase his potential as a future rally winner, the Russian had been lying in a strong third place until a roll on SS2 brought an untimely end to his rally. Carrying too much speed into a tightening right-hander some 200 metres from the stage start, Novikov hit a stone wall which consequentially rolled the car and caused significant damage to his Fiesta RS WRC.

Unfortunately for the youngster, the damage proved too severe and Novikov will not restart for tomorrow’s final day.

“As with the last two rallies, our aim here was just to get to the finish and I think it’s paying off again. Obviously we had a very good feeling with the car today. Everything is working really well so we said it would be stupid to slow down when there was no reason to do so and no big risks with the driving. When the times are good and we don’t feel on the edge, there is no point in losing the rhythm and risking a loss of concentration.

“I saw where Mads [Østberg] went off [on SS8]. It was a blind corner after a crest and I don’t know if there was some dust on the road because it was very slippery. When I touched the brake there the car just went straight on so I think I was lucky there and Mads was just very unlucky.”

“We’ve had a lot of new things to deal with today – new car, new co-driver, new rally – so pretty much everything was new! It was a big challenge, but a great opportunity and throughout the day with learnt a lot about the car and a lot about each other.

“I’m really looking forward to tomorrow now. We’ll just try to stick with what we’ve got now. We definitely don’t want to go backwards, but if we can keep improving step by step that would be good. Our main focus was always just to finish the rally, and that won’t change tomorrow – hopefully we can continue to improve along the way.

“There isn’t a big gap up to eighth, but we promised ourselves before we got here that we weren’t going to look at times. We’ll just concentrate on doing our own thing, try to improve further and just see what that brings.”

“It was just after the start of the second stage [SS2] going into the first right-hand corner. We were carrying too much speed and it was really slippery. The corner tightened, but in my pacenotes we had it marked down as ‘flat’. We hit a stone wall and damaged the left side of the car quite badly – especially the rear-left.

“Unfortunately for us, and for the team, we will not restart tomorrow. Of course it is very disappointing, but the most important thing is that both myself and Ilka [Minor, co-driver] are OK.”

Østberg rolled his Ford Fiesta RS WRC on SS6. Both driver and co-driver were unharmed and the team will now assess whether they will be able to restart under Rally 2 tomorrow.

“It has been a day of mixed fortunes for the team today. Thierry has been fantastic once again. He’s taken two stage wins – the only driver other than the Volkswagens to do so – which is very encouraging for him for the remainder of the season. And with just a three second gap to Mikko [Hirvonen, in second] he and Nicolas [Gilsoul, co-driver] have done an excellent job.

“Elfyn [Evans] too has driven really well on his first event with a world rally car. He’s built his pace as the day went on and shown that he can learn and adapt quickly to a difficult situation.

“Unfortunately both Evgeny [Novikov] and Mads [Østberg] were caught out by the difficult nature of this event. Evgeny won’t restart tomorrow and the team are currently assessing whether or not Mads will be able to rejoin the rally tomorrow.”

A cool result in hot conditions: Ogier and Volkswagen in the lead in Italy