Novikov and Tänak take to the Vosges mountains in France

M-Sport Ford World Rally Team’s Evgeny Novikov and Ott Tänak will be out to impress once again as the FIA World Rally Championship (WRC) travels to the 11th round of the season in France next week. 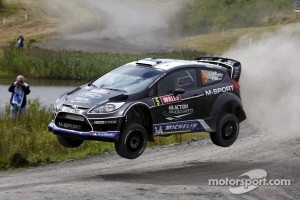 The duo have shown some impressive speed over the course of the year and will be looking to replicate their previous successes with a strong result at the 2012 Rallye de France Alsace.

Based around the border-city of Strasbourg, Rallye de France forms the final all-asphalt round of the season with crews tackling 404.14 km of competitive stages through the Vosges Mountains.

The fast and narrow country lanes are littered with cuts and technically challenging corners that demand perfect precision and total commitment from the drivers.

The M-Sport duo will also have to have their wits about them as they contend with the likelihood of inclement weather having the potential to make the stages perilously slippery and tyre choice vital.

But with Novikov on a high from his best ever finish on the previous round in Wales and Tänak boasting an impressive track record on the French event, the pairing will be well placed for a good result.

Following his sixth place finish at Wales Rally GB earlier this month, Novikov will be looking for another strong result next week.

Despite a string of misfortune on last year’s event, the Muscovite set some competitive times behind the wheel of his ALM Russia supported Ford Fiesta RS WRC and will be looking to put the experience gained into good practice.

After establishing a good relationship in Wales, Austrian Ilka Minor will once again be reading the notes as Novikov’s regular co-driver Denis Giraudet continues his rehabilitation following injuries incurred to his back in Finland earlier this year.

Celebrating his 22nd birthday last week, Novikov remains one of the youngest and most promising talents in the sport and, despite missing out on a pre-event test, will be out to challenge the top-runners once again.

Tänak and co-driver Kuldar Sikk have had an impressive string of results in the Vosges since the region first played host to the French round of the WRC in 2010.

Contesting the event for the first time two years ago, the Estonian clinched second place in the P-WRC and a creditable 19th place overall.

Returning as part of the S-WRC in 2011, Tänak did one better – dominating the event with a victory of over two and a half minutes which also saw the 24-year-old secure 11th place overall behind the wheel of his Ford Fiesta S2000.

Making his debut on the event with the Ford Fiesta RS WRC next week, Tänak has been continuing his training and will be hoping to replicate the strong performance he showed on the WRC’s previous asphalt outing in Germany where he secured two stage wins and was running in a strong fourth place.

“I am feeling very good ahead of this event. I like the rally a lot and it will be good to have Ilka [Minor] back in the car as we worked well together [in Wales].

“The stages can be very quick and twisty in places, but really it is an [asphalt] event that has a bit of everything!

“I am sure we will be fine. I am feeling good, and I hope we can get a good result. As usual we will just try to do our best and see how we go.”

“The feeling is pretty good ahead of this event. In Germany we had a really good feeling on Tarmac so I hope we can do the same and set some good times [in France].

I have done this event two times before and we have always gone quite well here, so the confidence should be OK.

“The stages through the forests can get quite dirty and there are quite a lot of cuts in places but they are really enjoyable to drive – really fast in places and a lot of fun. Of course they are always easier when the weather is dry, and if it does rain I think the event could be quite tricky with much more mud and gravel being pulled onto the stages.

“For us, we will just do our best as usual and hopefully we can get a good result for the team.”

Daniel Oliveira arrives in France for another try on asphalt