Qatar M-Sport World Rally Team’s Evgeny Novikov put in a sensational performance today to fly into the lead of the Acropolis Rally of Greece. Winning both stages by a comfortable margin, the youngster made the perfect start to lead the event by over half a minute.

Having set the third fastest time in this morning’s qualifying stage, the Russian was well placed going into the event’s opening tests – the first, a mammoth 47.70 kilometres in length and the second incorporating the added challenges of being run in darkness. Partnered by co-driver Ilka Minor, the young charge was faultless in his approach – mastering both stages flawlessly behind the wheel of his Ford Fiesta RS WRC. 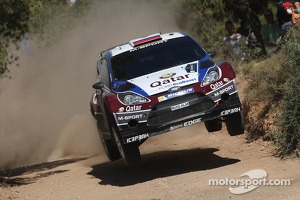 Over 20 seconds faster than his nearest rival over the opening test, Novikov controlled his pace perfectly to claim a comfortable early lead. It was more of the same in SS2. Despite a small mistake under braking, the Russian claimed another stage victory to secure the optimum position going into tomorrow’s competitive action.

Unfortunately, the story was somewhat different for Novikov’s team mate Mads Østberg. Succumbing to yet more cruel misfortune, the Norwegian and his Swedish co-driver Jonas Andersson were forced to stop and change the front-left wheel some 500 metres into the first stage. Following an encounter with a concrete step, the impact broke the wheel clean in two – losing the Scandinavians over three minutes and relegating them to 11th place in the overall standings.

Climbing back to ninth place over the second and final stage of the evening [SS2], Østberg will be looking to claim further positions as the rally continues tomorrow.

Elsewhere, things were looking good for the two Qatar World Rally Team Fiestas. Despite a challenging run after being caught out by the conditions on SS1 – which were much rougher than expected – Thierry Neuville and Nicolas Gilsoul controlled their speed. Another clever approach to a difficult rally has thus far proven fruitful for the Belgians as they finished Day 1 in an impressive fourth place overall.

It was a similar story for Nasser Al-Attiyah and Giovanni Bernacchini. Having lost time in SS1 when they caught a stricken Mikko Hirvonen, the duo lie a creditable sixth on this Bernacchini’s 100th appearance in the FIA World Rally Championship. Well aware of the pitfalls associated with this abrasive event, the Qatari will be looking to gain further places on tomorrow’s tricky tests as he chases another well-placed finish in the Fiesta.

“I am very satisfied with today. We tried to keep a good rhythm and maintain good speed from the start and it looks like that has worked well. We had no problems and no big moments. There was some dust on the first stage [SS1], not everywhere, but in some of the slow sections, and then we made a small mistake under braking on SS2 so I think that we could have gone quicker in places.

“I know this rally quite well – this is my fifth time here now – so maybe that helps a little. To be leading is a great feeling, and I hope that it continues! For tomorrow I will just try to keep this good rhythm, watch the splits and continue this good form.”

“The stages were a lot rougher than we expected today. We drove quite calmly at first and then when I felt more confident we went a bit faster. But I think everybody had the same problem. I don’t think that my set-up was quite right for the conditions on the first stage [SS1], because I didn’t have so much confidence turning into the tight hairpins.

“We damaged something on the car on that stage too [SS1] and I couldn’t drive as hard as I wanted, but the mechanics fixed the car perfectly for the second stage [SS2]. The car felt much better on SS2. We hit a big rock, but luckily we have a very strong car underneath us so it was no drama.” 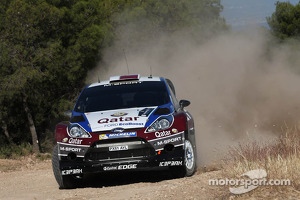 “It’s easy to damage the car on a rally like this so we took it easy to make sure we got to the end without any problems.

“We lost about 10 seconds when we caught Mikko [Hirvonen] on the first stage [SS1]. Our cars actually made contact so that was a bit of a scary moment. I went and said sorry to Mikko because we didn’t know he was there so we were very lucky. Then on the second stage [SS2] the car didn’t feel quite right – maybe a problem with the differential on the rear – but we made it through which is the most important thing.

“Tomorrow it will be really tough – I think getting through those rough stages will be the key to this rally. But we have a good car, and good Michelin tyres so that will help us and I hope that we can make it through without any problems.”

“It [the impact which broke the wheel] was just in the beginning [of SS1] going onto a concrete step. We knew it was there and I didn’t feel as though there was much of an impact so it was very strange – nothing like I have ever experienced before. The nuts and the bolts were all still there, but everything else was gone – the rim and everything.

“We’ll have to have a proper look at the onboard to see exactly what happened and how it happened, but obviously I am extremely disappointed. The disappointment was still with me for the second stage [SS2] and I couldn’t get into the perfect rhythm.

“There is still a long way to go, but a lot will have to happen for us to get back up to where we want to be now. We’ll have a fresh start tomorrow and fight as hard as we can to claim back some positions.”

“It’s been a storming drive from Evgeny [Novikov] today – it’s very rare for a rally leader to establish a 30 second lead after just two stages so he’s done a fantastic job! He’s now in a really strong position to manage the rest of the event.

“We’ve seen a strong performance from the team all round with both Thierry [Neuville] and Nasser [Al-Attiyah] setting some strong times. Obviously it was a real shame about Mads [Østberg], but he is still in the top-ten and given that this is the most demanding event of the year, a podium is still possible.”