On the marathon leg one in Rally Italia Sardegna, Sebastien Ogier pulled an edge of 46+ seconds over his nearest challengers! With only two legs In this World Rally Championship event, the Frenchman needs to just bring it home.

The Volkswagen Polo R driver led after the opening stage and was already 20 seconds clear after the opening loop. He won two more stages and there was no disguising the Frenchman’s ambitions as he emerged from the final night test.

“I came here with the motivation to win because it’s two rallies since I had a win and I want that feeling again. But only half the rally has gone so we have to make sure we complete the job tomorrow,” said Ogier. 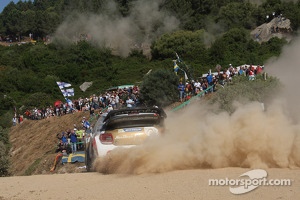 The fight for second was closer. Mikko Hirvonen, Mads Ostberg, Thierry Neuville and Dani Sordo were covered by 20sec for much of the day, but Hirvonen repelled the attacks in his Citroen DS3 to hold a narrow advantage over Thierry Neuville.

In many ways Neuville’s performance was the drive of the day. The Belgian revolutionised the handling of his Ford Fiesta RS by adjusting the brakes after the opening loop and he charged from fifth to third, slashing a 20sec deficit to Hirvonen to just 3.1sec.

“Everything went well except for a small spin this morning,” he said. “I hope we’ll continue like this tomorrow. I would be happy with third but I have two third-place finishes, so second would be nice. We’ll have a talk and come up with a plan.”

Sordo fell back over the final two tests, the Spaniard overnighting almost 30sec behind Neuville. “It was an OK day. It’s never good because you always want more. I didn’t do the rally last year so that was a bit of a disadvantage but we’ll be fighting for the podium tomorrow,” he said.

The big loser in the quartet was Mads Ostberg. The Norwegian held third for much of the day in his Fiesta RS, and was happier with the handling after fitting new springs for tonight’s final two stages. However, he rolled out early in the last test.

His demise promoted Jari-Matti Latvala into fifth in a Polo R. The Finn dropped two minutes with a puncture in the opening stage and spent the rest of the day recovering, posting three stage wins en route.

Andreas Mikkelsen is sixth, the Norwegian being overhauled by Latvala in the final stage. Martin Prokop is three minutes further back in seventh, more than 90sec clear of Michal Kosciuszko. 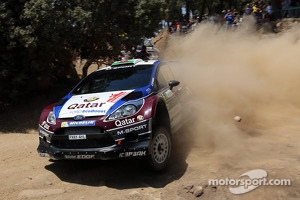 Evgeny Novikov retired after a big roll in the second stage and will not restart. P-G Andersson retired in SS6 after struggling with a broken rear driveshaft.

Kubica holds a commanding lead of 1m 11.8s in the WRC-2 class, having won six of the eight stages in his Citroen DS3 RRC. Second is Ford Fiesta RRC driver Abdulaziz Al-Kuwari, while local hero Lorenzo Bertelli is third, 59.6 sec further back in another Fiesta RRC.

Series newcomer Stephane Consani holds a slender 16.1sec lead in the WRC-3 category, having moved ahead of Christian Riedemann on the final stage. Championship leader Sebastien Chardonnet is third, 10.1sec behind. All three are driving Citroen DS3 R3Ts.

The second and final leg starts at 07.00 and drivers tackle two loops of four stages covering 157.38km before the evening finish in Olbia.