Volkswagen versus Citroen for the final battle for the Swedish Rally victory will take place tomorrow between the two 'Sebs' who were teammates last year.

Sebastien Ogier remained in control of Rally Sweden after today's second leg. The Frenchman won three of the eight stages in his Volkswagen Polo R and will start the final day with a 26.9sec lead over Sebastien Loeb.

He has led since the second stage and began today with a 31.4sec advantage. The 29-year-old won the first test and added two more wins this afternoon to preserve what would appear to be a comfortable margin ahead of tomorrow’s last leg. 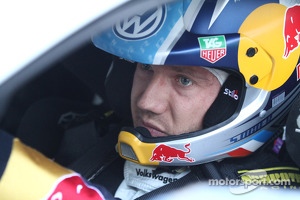 “It was another very good day for us,” said Ogier. “The morning was a question of finding a rhythm. It’s not easy when you don’t have to push completely to the maximum. We have a comfortable lead so that’s good.”

Drivers tackled two identical loops of four stages east of the Hagfors service park covering 114.02km. The snow-covered roads were in good condition this morning, but when the stages were repeated, gravel filled ruts presented difficulties as tyres shed their studs.

Loeb said his Citroen DS3 understeered in the gravel but the nine-time world champion won three stages to keep in contact with his former team-mate.

“I lost a lot of time to Ogier yesterday after my bad qualifying made it quite expensive. Today we’ve been in a good battle, but we’re too far behind. More than 20 seconds is too much,” said Loeb.

Loeb’s pace carried him clear of Mads Ostberg and Jari-Matti Latvala who dueled for third. Ostberg had the upper hand and the Ford Fiesta RS driver finally moved ahead in the second stage this afternoon to end 6.1sec ahead of the Polo R pilot. 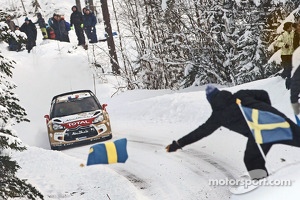 “Loeb increased his speed and it was difficult to keep up. For the last half of the day we focused on Latvala and took time off him, which is good for our start position tomorrow. I can’t do more than this at the moment. I’ll continue pushing and if something happens I’ll be there, but I can’t catch him,” said the 25-year-old.

Latvala won one stage but the 27-year-old Finn was glad to turn off his engine for the evening. “It’s been a very, very frustrating day but we’re here and haven’t made any mistakes,” he said.

Evgeny Novikov enjoyed a troublefree and consistent day to retain fifth, the first of a group of five Fiesta RS cars. Juho Hanninen and Thierry Neuville fought over sixth and the Belgian came out on top when Hanninen planted his car in a snow bank for more than a minute in the final stage.

Pontus Tidemand was the day’s big casualty, the young Swede retiring from sixth with engine problems. Matthew Wilson rolled out in the same stage and Khalid Al Qassimi retired following the penultimate test after hitting a log pile and damaging his radiator.