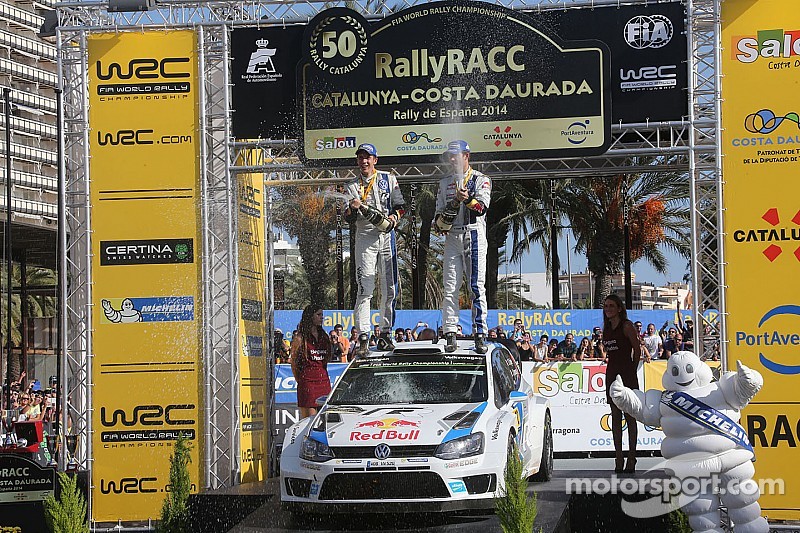 Jari-Matti Latvala fought to the end, but it simply wasn't enough to take the FIA World Rally Championship title fight to the final round.

Sébastien Ogier and Julien Ingrassia have claimed back-to-back FIA World Rally Championship titles* after winning the 50th RallyRACC Rally de España today. The French duo has won seven rallies this season and led the Championship for all but one event to raise the prized trophy for the second consecutive year. Ogier's lead stands at 31 points.

Jari-Matti Latvala and Jarmo Lehtinen have put up an incredible fight all weekend, the Finns needing to finish ahead of their team-mates to keep their title chances alive. Despite a string of great stage times, however, time lost on Friday resulted in the Finns standing alongside in second position. Third was taken by Mikko Hirvonen and Jarmo Lehtinen, their first podium of the season in the Fiesta RS WRC.

With the Driver and Co-driver titles now sealed, and the Manufacturers’ Championship already wrapped up by Volkswagen Motorsport at Rally Australia*, the final round of the series will see an intense fight for outright victory in the Welsh forests.

Today’s route was the shortest and covered two identical loops of two stages over 72.06 competitive kilometres, the final Riudecanyes test also running as the Power Stage. Ogier began the day with a handy 27.3 second lead, but Latvala was never going to let his team-mate take an easy win or Championship title. The Finn’s relentless pace saw him claim all four stage wins, but it simply wasn’t enough and he ultimately finished just 11.3 seconds adrift. A really strong performance from Mikko Hirvonen rewarded the Finn with third overall and like most of the crews, he ran without problems to the finish.

Nasser Al-Attiyah rounded off the top 10, but more importantly claimed the FIA WRC 2 Championship win which puts him at the top of the Championship table going into Wales Rally GB. It is also the Qatari’s first victory on Tarmac. In the FIA WRC 3 Championship, Mohamed Al Mutawaa took maximum points and his first category victory of the season.