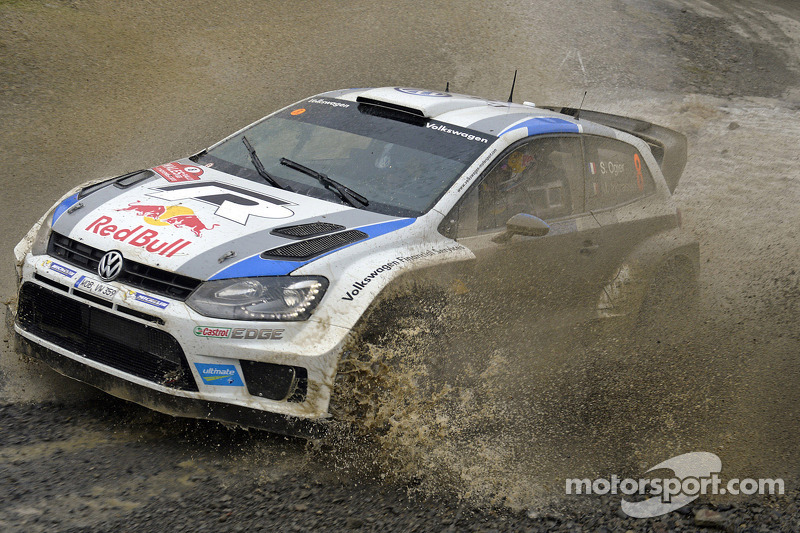 Sebastien Ogier rounded off a dominant debut WRC season at Volkswagen with victory today on the final round of the championship, Wales Rally GB.

It was the ninth win of the year for the Frenchman, who drives a Polo R and who secured the FIA drivers’ title at October’s Rallye de France.

Ogier took the lead in Wales on Thursday’s opening stage and controlled his pace perfectly, fending off a sustained attack from his team-mate Jari-Matti Latvala, a two-time winner here, on the slippery forest roads of mid and north-Wales.

After celebrating with co-driver Julien Ingrassia at the end of the decisive Great Orme stage, Ogier said he was delighted to have eclipsed his previous best in Wales of a lowly 11th in 2011.

“I’m so happy, and big thanks to the team once again - the car was perfect,” he said. “I came here knowing this rally was not the best for me in the past, and even with that we managed to win a battle with a team-mate who feels at home here. It was another great victory for us and the end of a perfect season. It’s going to be a hard challenge to do better next year...”

Latvala finished as runner up, 21.8sec behind Ogier in Volkswagen’s second Polo R. The Finn had an inconsistent rally that featured stage winning highs as well as frustrating lows when he couldn’t find a confident feeling at the wheel.

A final day push for the lead started well, with Latvala narrowing the gap to Ogier to just 19.5sec after the two opening stages. But a stall at a junction on Clocaenog (SS19) cost him six seconds and ended the charge.

“I’m disappointed because I won this rally in 2011 and 2012 and I was hungry for the third victory, but it didn’t work out this year.” he said. “Speed wise it was good but there have been too many little mistakes, and a bit of hesitation.

“It’s like I haven’t had the rhythm all the weekend. That’s the problem and that’s what I need to concentrate on next year. The speed is there, that’s the main thing, now the rhythm needs to be right.”

Belgium’s Thierry Neuville was third, 1m 02.7s further back, to round off a remarkable season with the Qatar World Rally Team and, more importantly, secure second spot in the WRC drivers’ championship.

“I’m really, really happy with that, it’s a result we couldn’t have imagined at the beginning of the season, with a new car and new team,” said Neuville, who bagged three bonus points by winning today’s Power Stage in his Ford Fiesta RS.

“The team have done such a great job and Nicolas and I worked hard to achieve this. I’m really pleased and I have to thank everybody for the help we have had. Qatar and M-Sport were just beautiful.”

Ford Fiesta RS driver Mads Ostberg was fourth, 27.7sec behind Neuville, after a tense duel with his fellow Norwegian Andreas Mikkelsen. Ostberg moved ahead when Mikkelsen spun on Sunday’s opener, then got a lot more comfortable when Mikkelsen did the same again two stages later.

“It was a good fight today, just a bit of a shame we didn’t find this feeling in the car earlier,” said Ostberg. “But it’s nice to have a positive day and have shown good speed. We have learned a lot this year, I’m looking forward to starting again in 2014 – I will be back in Monte Carlo in a world rally car...”

Finishing fifth, 15.2sec further back, Polo R driver Mikkelsen said: “For sure it has been a good weekend. Okay, it has not ended the way be wanted, sadly two mistakes cost me fourth place, but we showed good speed without too many mistakes. Overall it’s been an amazing year.”

Martin Prokop was sixth in a Fiesta RS, more than five minutes behind Mikkelsen, with Dani Sordo seventh, and the sole factory Citroen finisher, having dropped out of contention before the start with a five-minute penalty.

The lead trio in the WRC 2 category, Elfyn Evans, Jari Ketomaa and Mark Higgins rounded off the top ten.

Elfyn Evans secured a breakthrough victory in the WRC 2 support category at Wales Rally GB this afternoon after dominating the four-day event in a Ford Fiesta R5.

The 24-year-old Welshman made the most of local knowledge after taking the lead on the second of the 22 speed tests on Thursday night. He was never again headed and after building a comfortable lead he measured his pace to win by 63.1sec.

Evans, who won the WRC Academy title last season, stepped up to the major support series this season. He finished second on the asphalt rallies in Germany and France before sealing top spot in the mud-caked forests of north and mid-Wales.

“It feels great to win my home round. Today I concentrated on driving cleanly and not doing anything silly. It has been a great learning experience with the M-Sport team and I’m grateful to them for delivering such a fantastic car,” said Evans.

Ketomaa, who took maximum points in Finland earlier in the season, led initially but was hampered by a misfire and fell to third behind Mark Higgins. With his Fiesta R5 restored to full health, he moved back ahead yesterday and headed the Isle of Man driver by 64.8sec.

“It’s a pity we had problems with the car but in motorsport things don’t always work as they should. We were very lucky to escape a huge fifth gear moment this morning and the misfire returned again in tight hairpins and uphill sections,” said Ketomaa.

Higgins suffered similar misfire issues yesterday, but the 42-year-old triple British champion was happy with a podium on his first appearance at the rally for five years.

“We had a couple of little niggles but it was a great weekend. I didn’t want to do anything silly today so I settled for what I had. There was a great atmosphere in the forests and the new venue for the rally was a great success,” said Higgins.

Cave, incurred a hefty time penalty after changing the gearbox in his Fiesta R5 on Thursday night. But he stormed back up the order with a string of stage wins on Friday and also survived a sticking throttle.