The last day of action of the last rally of the year turned out to be one of the best performances for Daniel Oliveira who finished the Rally RACC of Spain and his second season in the FIA World Rally Championship in high spirits.

The Brazilian driver and his Portuguese navigator Carlos Magalhaes bounced back from difficult beginning and today they found a good pace on board the Stohl Racing-run Ford Fiesta RS WRC through the Catalonia asphalt roads.

Today the threat of rain forced the teams and drivers to take a thorough decision on the choice of the tyres compound since most of the stages were dry, but there were still some damp patches under trees and in corners. 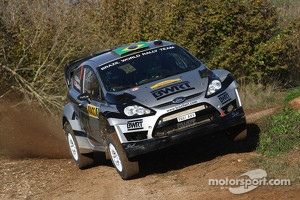 The last leg kicked off with a fast and twisty stage which really suited Daniel b est. The Brazilian driver had a strong start and just flew through it to set the 10th fastest time on his way down to Riudecanyes.

"It was a good start. When you have good grip everything changes", said Oliveira.

However, road conditions began to change in the next speed test as it started to rain when Daniel was on his way through SS14 Santa Marina (26.51km). "It was really slippery and he had to take extra care so as not to make any mistake", added.

More rain was expected for the repeated stages, but before that occurred, Oliveira made the most of the good feeling he had in today's opening speed test to be 9th fastest on SS16 Riudecanyes (16.35km).

He improved three seconds over his first run and made up for the loss of time to less than 1.5 per kilometre.

The last real challenge was the second run through the Santa Marina test, which host the Power Stage. Later on there was only the short SS18 La Serra d'Almos (4.11km) remaining to finish the rally and Daniel's second season in the WRC.

"I took extra care in the Power Stage. Conditions were really difficult. It was very slippery and I didn't have enough confidence to push there", he said.

Oliveira finally brought his Ford Fiesta WRC back to the Service Park in the 16th position overall to round a good job in his last outing this year, which also ended with eight points for the Brazil WRT in the Manufacturer Championship.

"The beginning was bad for everybody, with lots of problems, but we did a good job in the last two days . We found the pace and we can go home happy.

I have to congratulate Manfred Stohl and his team for the great job they done this year. I think we made a great progress this year and we will work hard for a comeback next year", concluded Daniel.