The BWRT's Brazilian driver Daniel Oliveira and his Portuguese navigator Carlos Magalhaes are ready to tackle the Rally RACC de España (November 9th-11th) on board the Stohl Racing-run Ford Fiesta RS WRC to see their second season off in the FIA World Rally Championship.

As expected for a final round, the Rally de España will push both the drivers and machines to the limits. 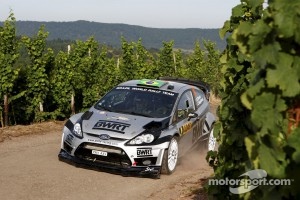 The competition will introduce for the second time a mixed-surface event to take place in the province of Tarragona, to the Southwest of Barcelona.

That is where the event will kick off and it will be the first time the capital of Catalunya will host a WRC round.

Based on the seaside tourist city of Salou, in the famous Costa Daurada, the event will feature some narrow and twisty gravel a nd asphalt stages -some of them with really low speed average- which are spread around more than 100 kilometres far from the Service Park in the Port Aventura theme park.

This year's edition will be practically identical to 2011 with 405.46 competitive kilometres and 18 stages scheduled; however, it will be introduced a completely new stage with another two which has been run for the last time in 2010.

Daniel and Carlos will have a slight approach to the tarmac since the first day of action will feature a mixed surface itinerary.

"One of the things I remember the most of this event it's the lack of grip and poor visibility due to the dust hanging in the air in the first leg.

We have to tackle the tarmac roads with a set-up and tyres for gravel. There is a really long stage and t will be a tricky start", said Oliveira.

The second and third days of the event will run entirely on asphalt and that would mean the Stohl Racing squad will have to work harder than ever overnight to get the Ford Fiesta RS WRC into the asphalt trim.

"Those will also be really demanding days, especially Saturday with the almost endless El Priorat stage. You have to take care of the breaks and tyres there to ensure your way to the final leg.

The luck of grip it's also an issue due to the dirt pull onto the road when the cars cut the curves", added Daniel.

The route. The rally kicks off with two full gravel speed tests on Friday, the brand new Gandesa stage (7km) and Pessels (27.59km), before the famous Terra Alta, a test which has had an extra eight kilometres added.

This is the longest mixed-surface stage of the rally with over 44 kilometres. A short stage through the centre of host town Salou has been also included to finish the day.

The final day of action will see the return of Riudecanyes (16.35km) and Serra d'Almos (4.11km), which will host the Power Stage, alongside Santa Marina, the longest stage of the leg at 26.51km.

The reconnaissance of the roads starts next Tuesday until Wednesday, whereas the Qualifying Stage which take place in Salou on Thursday morning. At night, the crews will kick off the rally in the Cathedral of Barcelona.