Rally RACC of Spain's treacherous opening Day complicated Daniel Oliveira who was forced to drop out after the rain and muddy conditions played a dirty trick on him when cutting a curve with his Stohl Racin-run Ford Fiesta RS WRC.

The BWRT Brazilian driver and his Portuguese navigator Carlos Magalhaes were already expecting really demanding conditions in the first day of action of the closing round of the 2012 WRC which featured mixed-surface stages; however, unexpected heavy rains made things even worse. 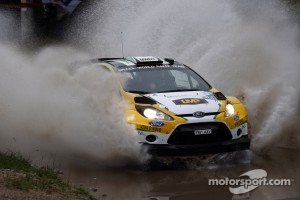 Although weather reports announced some rains for today the drivers were hit by downpours for moments. Daniel and the team decided to start the rally on soft tyres, but the conditions where really difficult, even with the proper compound cho ice.

"There were places with lots of ruts and we had to struggle with standing water and aquaplaning", said Daniel.

Oliveira's Ford was the second car on the road behind Australian Chris Atkinson's Mini and he enjoyed better grip in the first two stages Gandesa (7km) and Pesells (26.59km).

That enabled him to secure a cautious pace which took him safely to the next section in the 11th overall position while many of his rivals got troubled.

It was in the gravel portion on SS3 Terra Alta, (44.02km), the longest mixed-surface speed test of the rally, when Oliveira lost the control of the car.

The Ford Fiesta got stuck in a muddy ditch after spinning and the crew couldn't release the car back onto the road.

"We were doing well in an area of fast corners and in one of them I lost the car. We went off the road, got stuck in the mud and were unable to return.

It's sad because I was reaching my goals regarding our times, b ut I guess this is part of the rally. Tomorrow we will speed up and work hard to represent Brazil well in this final outing of the WRC", explained Oliveira.

The Stohl Racing mechanics took the car back to the Service Park in Salou. Hopefully, the Ford Fiesta WRC didn't suffer any major damage and that will ease the works on the car to get it into the asphalt trim for tomorrow's stages.

Tomorrow's route. The second day of the event, as well as the third one on Sunday, will run entirely on asphalt with stages spread around within 100 kilometres far from the Service Park in the Port Aventura theme park.

The organizers decided to repeat Riba-roja d'Ebre (14.20km) for Saturday's leg and bring forward La Mussara (20.48km) which took place on a Sunday back in 2011, and which will be the first stage of the day.

In between, the drivers must tackle the tremendous challenge offered by the famous El Priorat (45.97km), the longe st asphalt speed test of the calendar.

Each stage will be repeated once, with a visit to the service in the middle, and the drivers will tackle 161 competitive kilometres.