When the 2012 FIA World Rally Championship season has ended with its last round – Rally Spain (8–11 November) – Volkswagen Motorsport will only have 66 days left before its first run as an official WRC entrant with the new Polo R WRC is coming up at Rallye Monte Carlo.

In Spain, the team is fielding two Fabia S2000 cars of the Group’s Škoda brand for the last time.

Whereas regular driver Sébastien Ogier continues to rely on the instructions by his co-driver Julien Ingrassia, Andreas Mikkelsen will be navigated by Mikko Markkula (31) for the first time. 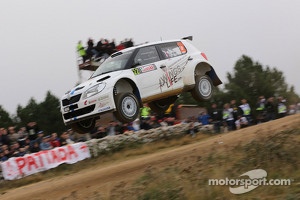 In order to prepare for the WRC entry in competitive conditions Volkswagen has been running during the whole season, except at the Rally New Zealand, in the Super 2000 category.

“The Volkswagen Motorsport team has had an eventful and instructive year. With our WRC runs, we entered new territory.

The results, which were often outstanding, show how well the whole team has meanwhile adjusted to this commitment,” says Volkswagen Motorsport Director Jost Capito, taking initial stock of the season.

“Naturally, we want to continue this way in Spain. After eleven class victories so far, completing the dozen would be further confirmation of our work.

With their one-two class result and positions five and seven most recently in Sardinia, our drivers not only demonstrated their exceptional speed but also showed that they’re capable of taking their cars to the finish intelligently and quickly, and safely as well,” says Capito.

Capito is aware of the fact that the good results achieved this year raise the level of expectations for 2013. “Still, one shouldn’t expect too much right away as test runs and competition runs are two completely different things.

But what we can say with a clear conscience is that we’ve done everything within our means to start into the World Rally Championship adventure with optimum preparation.”

Rally Spain: last round of the season with a mix of gravel and tarmac

The rally on the Iberian Peninsula has been held since 1957. In 1991, the event was included on the WRC calendar. The first winner back then was the German Armin Schwarz.

Since 2005, the Costa Daurada tourist region, located around 110 kilometres south of Barcelona, has been the venue of the WRC round. It is characterised by fluid, extremely fast tarmac stages.

The drivers, however, are in for a special challenge here, as around 30 per cent of the special stages are driven on gravel. Sometimes the surface even changes on the same special stage.

In such a case, the drivers are faced with the choice of either driving their cars on gravel with the hard tarmac set-up or, conversely, driving on tarmac with the soft gravel set-up.

“Rally Spain is one of my absolutely favourite rallies because we’re driving on tarmac as well as on gravel. That makes the rally very challenging for the drivers, but that’s exactly what I enjoy,” says Sébastien Ogier.

“Last year, I was unfortunate, with two punctures and engine problems – this year, things should be going better.

Looking back, the 2012 season has been an interesting year for me even without a WRC car. Running in the S2000 category has been a good experience.

In addition to my team, I’d like to thank Škoda for their support. Now I’m happy that after Rally Spain we can fully concentrate on our first run in the Polo R WRC and then being in contention for the front positions again.”

The 28-year-old Frenchman last caused a stir at Rally Italy when he was the first driver of an S2000 car to succeed in setting a fastest time against the WRC competitors with more horsepower.

In Volkswagen’s preparatory season, Ogier, to date, has clinched as many as ten S2000 class victories and has even scored 41 points in the drivers’ world championship in the process.

The new champion of the Intercontinental Rally Challenge (IRC), Andreas Mikkelsen, will be at the wheel of the second Fabia S2000 fielded by Volkswagen Motorsport for the seventh time this season in Spain.

"It’s a great feeling to be travelling to Rally Spain as IRC champion,” says the Norwegian. I last drove in Spain in 2008, but that was only on gravel back then. This will also be my first rally with my new co-driver Mikko Markkula.

I’d like to thank Ola Fløene for the fantastic teamwork. Now I’m looking forward to the new challenge with Mikko. Our main goal is to find a good rhythm. But of course I want to stay on Sébastien’s heels like at the last rallies,” says Mikkelsen.

In Spain, 18 special stages covering a total of 405.46 kilometres are awaiting the WRC contenders. The rally starts on Thursday (8 Nov) with qualifying in Salou.

In the evening, at 17.30, the Ceremonial Start will take place in front of the cathedral in Barcelona. On Friday morning (9 Nov), rally fans should rise early as the first special stage starts at 7.45.

Enders-Stevens all smiles after 'beating' husband in Indy's Q3