Mads Østberg and Thierry Neuville are leading the way for the team’s four-car squad.

As the first gravel round of the FIA World Rally Championship got underway, Rally Mexico proved fruitful for the Qatar M-Sport and Qatar World Rally Teams.

Having both led the event in its preliminary phase, Mads Østberg and Thierry Neuville are leading the way for the team’s four-car squad - the Norwegian battling for victory in second with the young Belgian impressing to fourth place overall. 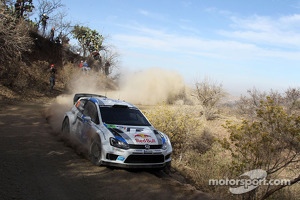 As rallying met heritage for Thursday’s opening sprint tests, the Qatar M-Sport crews put in an impressive performance which saw Østberg and Neuville both lying less than a second adrift of the lead.

With thousands of fans giving the spectacular Guanajuato opener a real party atmosphere, Neuville was the one celebrating as he led a one, two, three finish for the squad through the cobbled streets of the former mining town.

Embarking on the first full day of competition, the stage was set for an almighty battle and the Qatar M-Sport crews did not disappoint.

With their Ford Fiesta RS WRC set-up for the slower, twisting sections, Østberg and co-driver Jonas Andersson reaped the benefit through Las Minas and Los Mexicanos (SS4-5 and SS9-10) to take their tally of fastest stage times to four.

Indeed the first pass was enough to propel the Scandinavian duo into the lead of the event. But the fearsome El Chocolate test would prove to be the pairing’s ‘Achilles Heel’.

Concerned that he had developed a puncture towards the end of the first pass and struggling to find a consistent rhythm over the second, Østberg was forced to back off the pace losing valuable seconds to main rival Sébastien Ogier.

Yet a determined Østberg refused to let the Frenchman loose. With two days and some of the most demanding stages left to run, the 24-year-old has left Ogier far from pressure free.

Clearly getting to grips with his Fiesta RS WRC, Neuville and co-driver Nicolas Gilsoul demonstrated some sensational pace on what is only their second venture to the Mexican event.

Claiming a string of top-three stage times, the pairing found themselves tantalisingly close to a podium position – just 0.4 seconds adrift of Mikko Hirvonen come the close of SS8.

Despite a spin and being forced to slow his pace through the second pass of El Chocolate (SS10), Neuville remains less than half a minute shy of his first WRC podium.

Needless to say the world stage has not yet seen the Belgian’s full potential, but the composed way in which he has approached events of late is certainly paying dividends – the youngster currently on course to equal his best ever performance in the WRC.

Making a welcome return to the M-Sport fold and reunited with co-driver Giovanni Bernacchini, Nasser Al-Attiyah was also showcasing the Fiesta’s speed at its best.

Significantly improving the pace he displayed last year, the Qatari posted a series of top-ten times to continually challenge the championship regulars.

In this his seventh start in Mexico, Al-Attiyah is well versed in what it takes to get the most from these difficult stages. At one with both the cars and Michelin’s harder compound tyre, the Middle Eastern star now lays a creditable sixth going into tomorrow’s second full day of competition.

Elsewhere Evgeny Novikov’s promise was marred by yet further cruel misfortune. Thrown up by the high speeds of SS4, a rock pierced the underfloor of his Ford Fiesta RS WRC – damaging the connectors in the ECU and resulting in a consequential loss of power.

Fortunately for the young Russian, co-driver Ilka Minor – who is coincidentally celebrating her 100th WRC start this weekend – is as good at mechanical repairs as she is at calling the notes.

Replacing the unit, the pairing were soon back to their best – an array of top-three times demonstrating what could have so easily been a fantastic result for the Muscovite.

Mads Østberg (2nd) said: “We are happy to be second of course, but it’s been an up-and-down day for sure! We have seen what we can do when everything is working, and it’s very disappointing when we lose so much time in just a couple of stages.

“It’s still a big fight and, if we can find a good rhythm tomorrow, we will see what we can do. We are certainly not giving up!”

Thierry Neuville (4th) said: “Today has been a good day. When we felt good the times were good, but we are also being clever and not pushing too hard when the confidence is not 100 per cent.

Maybe we slowed down a bit too much on a couple of the stages this afternoon, but we are still here and that is the most important thing.

Nasser Al-Attiyah (6th) said: “Today has been a good for us. The car and tyres are working perfectly and I have been able to continually improve my times from last year. We are pushing, but these stages are very difficult so you need to be careful and make sure that you understand the limits.

“Evgeny [Novikov] was very unlucky this morning, but Mads [Østberg] and Thierry [Neuville] have been very impressive and I hope that all four of us can continue to improve tomorrow.”

Evgeny Novikov (13th) said: “This morning was a big disappointment for me, I came to this event full of confidence and ready to get a good result for the team, and also for Ilka [Minor, co-driver] on what is a very special event for her.

“But these things happen and there is not a lot we can do about it now. The most important thing for us is to keep motivated and make sure that we make it to the end of the rally.”

Team Principal, Malcolm Wilson OBE, said: “I have been delighted with Mads’ [Østberg] pace. He and Sébastien [Ogier] have been the only drivers to take a stage win today and when Mads is really in the rhythm, he’s proved very difficult to beat.

Thierry [Neuville] too has been very impressive. Like in Sweden, he’s taken a clever approach – not taking too many risks but still setting some fantastic times.

“There is still a long way to go, and as we saw today with Jari [Matti-Latvala] it is so easy to be caught out, anything can still happen. We’ll continue to put the pressure on Sébastien [Ogier] and see what tomorrow has to bring.”

M-Sport’s Adbulaziz Al-Kuwari and co-driver Killian Duffy put in a sensational performance in WRC-2. The pairing claimed all but one of the 13 stage wins on offer thus far to secure a comfortable lead behind the wheel of their Seashore Qatar Rally Team’s Ford Fiesta RRC. Leading the category by almost two and a half minutes, the future is looking bright for Qatar’s latest rising star.

Abdulaziz Al-Kuwari said: “It’s a very good feeling to be leading on our first event in WRC-2. Although we might look like we are in a safe position, there is sill a long way to go and anything can happen. Having said that, I think we have got through the toughest day and the full 25 points is definitely possible.”

M-Sport Managing Director, Malcolm Wilson OBE, said: “I need to congratulate Abdulaziz [Al-Kuwari] and Killian [Duffy] on what has been a dominant performance in WRC-2. Leading by over two minutes, they’ve had a very impressive day’s rallying and I’m looking forward to following their progress with the [Ford Fiesta] RRC tomorrow.”