Petter Solberg’s Citroen privateer team took an early edge in the seventh round of the World Rally Championship during the first day of the Acropolis Rally. The Norwegian has over a 50 second lead to Sebastien Loeb with four of the six stage wins. Third belongs to Mikko Hirvonen who is just 3.7 seconds off the pace of the points leader. 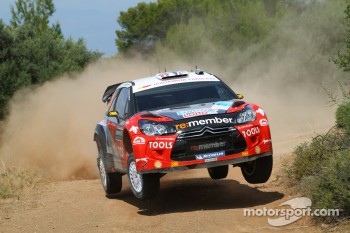 “I’m very happy with the day today,” said Solberg. “I had a good starting position and planned to make the most of it! Will be another tough day tomorrow, the stages are very rough, and I will have to be cautious to keep my lead.”

Centered around the historic capital of Athens, the rally in Greece returned to the 2011 calendar and again it will offer a challenge to the premier rally series. It is one of the hardest rallies to conquer and after last night’s rain, the trek was a bit more difficult but the sun was out as they completed the 141.33km route divided into six special stages from the Gulf of Corinth to Mount Kallidromo and back.

“The rain that fell during reconnaissance dampened the stages, but it has all dried out since then and we had to sweep off a thick cloud of dust,” explained Loeb who was first out and therefore was the one who cleaned the track for those who followed.

The French ace in world rallying said, “It was difficult being first, but despite our two punctures I reckon we’ve come out of it well. Petter Solberg is the only one to have taken full advantage of his position. It’s going to be difficult to knock him off the top of the time sheets. Where I’m concerned it’s looking more complicated as Mikko Hirvonen and Sébastien Ogier are only a few seconds behind. But there’s no question of lifting off, there are several challenges to take up tomorrow and Sunday!”

After Solberg and his navigator Chris Patterson were the winners of the first four special stages, Sebastien Ogier placed the Citroen factory team on top on the second pass of Thiva 2. His teammate, Loeb was fastest on stage 6, Mavrolimni. The two Ford Abu Dhabi drivers were in the hunt but neither Hirvonen nor Jari-Matti Latvala took a stage victory.

"I'm happy with the day and I believe third will be a good position in the start order tomorrow. The set-up felt good and my only difficulty came on the final two stages when the handling felt unpredictable. It was a hard day and there are still two more long, tough days to go," said Hirvonen.

The day did not end on a high note for Latvala when he encountered a problem in his Ford Fiesta on the final stage: "When I turned onto the gravel road about 500 metres before the start I realised there was a problem in the transmission. I checked the differentials before the start but didn't have time to do anything more.” The Finn dropped down to 8th in the event standings.

Ogier sits fourth and will chase Hirvonen as he is just 2 seconds back. Next were the two Stobart M-Sport Ford drivers with Henning Solberg 46 seconds off of Ogier and 44.5 second in front of his own teammate, Matthew Wilson.

Ogier commented at the end of the day, “We’ve managed to avoid all today’s pitfalls and we’ve got a good position for tomorrow, but the toughest part is still to come! We’ll have to push very hard to pass Mikko and Seb. As for Petter I think it’ll be very difficult to catch him in normal circumstances.” 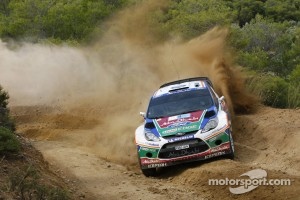 It was not a good day for Van Merksteijn Motorsport when on stage 3, they had a violent crash which sent both driver Peter van Merksteijn Jr. and co-driver Eddy Chevaillier to the hospital. While braking their Citroen, they hit a large rock on the underside of the DS3 which suspended the competition to attend to their medical needs . Both complained of back pain. The medical team at the local hospital airlifted Chevaillier to Athens.

Team Manager Gerard Grouve explained, "We wanted Eddy to have the best treatment so at our request he has been airlifted to a bigger hospital in Athens to make sure the checks are all okay. The doctors and the organisers have been very helpful. Eddy has a problem with his back and must stay flat."