Toyota’s Ott Tanak won his second successive WRC round with victory on Rally Portugal ahead of Hyundai’s Thierry Neuville, as teammate Kris Meeke retired on the final stage. 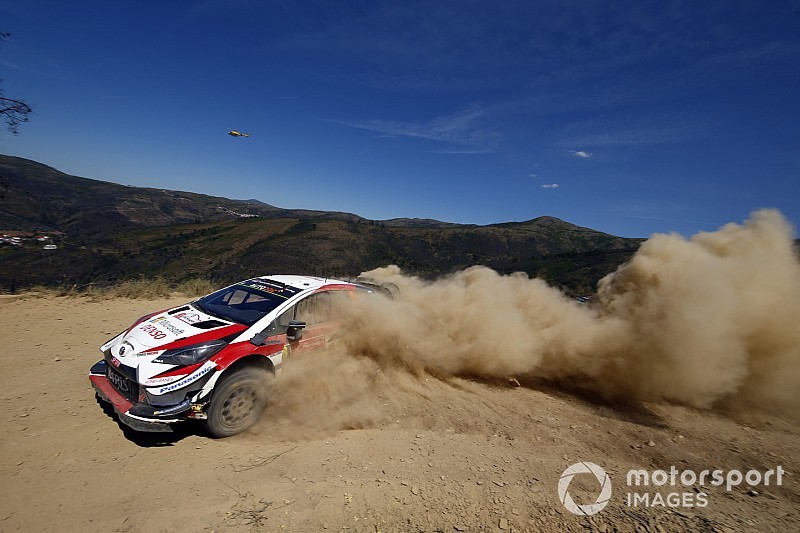 Meeke was running third heading into the Power Stage, but clipped something on the inside of a right-hander that instantly broke the front-right corner of his Yaris.

Sebastien Ogier was promoted into third, with Tanak’s winning margin over Neuville standing at 15.9s.

Ogier remains the championship leader by two points after winning the Power Stage. Tanak was third fastest after backing off at the end of the test to ensure his rival sweeps the road clear on the next round in Sardinia.

Tanak hit the front on stage three on Friday morning, when early leader Dani Sordo ran into trouble. The Spaniard had held a slim lead over Tanak, but fuel pressure issues dropped him well out of contention.

Although Tanak would never relinquish the lead, he wasn’t able to establish a comfortable advantage with both his teammates Meeke and Jari-Matti Latvala chasing him hard.

Latvala hounded Tanak on Saturday, opting for a harder tyre compound that handsomely paid off. Trailing by just 5.1s, the Finn was geared up for an attack but retired late in the day with a broken damper.

Tanak also broke his damper, and even though he managed to continue, Meeke spotted his chance and ended Saturday a mere 4.3s in arrears.

By then Neuville was also in contention, just 9.2s off the lead. He couldn’t match Tanak on Sunday but was there to pick up the pieces when Meeke’s rally unravelled on Sunday.

Ogier was lumbered with cleaning the road on Friday and struggled to keep up with the leading trio thereafter.

Teemu Suninen, who was in podium contention on Friday before losing brakes aboard his M-Sport Ford and fell back to sixth, recovered to take fourth place.

However, Latvala is expected to be given a notional time for the Power Stage that could elevate him ahead of Kopecky, as his run was curtailed by a red flag caused by Gus Greensmith.

Greensmith had a mixed debut in a World Rally car, running seventh until ditching his M-Sport Fiesta on Saturday’s final stage.

He returned on Sunday to run 11th, but the steering broke as he took off over Fafe’s big jump on the Power Stage, careering into a bank and into retirement just metres from the finish.

Esapekka Lappi retired from fifth on Sunday morning after rolling his Citroen C3 on the day’s opening stage. He then wrecked suspension on the first of Fafe and was unable to continue.

Sebastien Loeb endured a torrid weekend. He suffered the same fuel pressure problems as teammate Sordo, and then destroyed the rear-left of his Hyundai on the Power Stage after hitting something on a tarmac section.

Portugal WRC: Tanak on verge of victory as Meeke spins