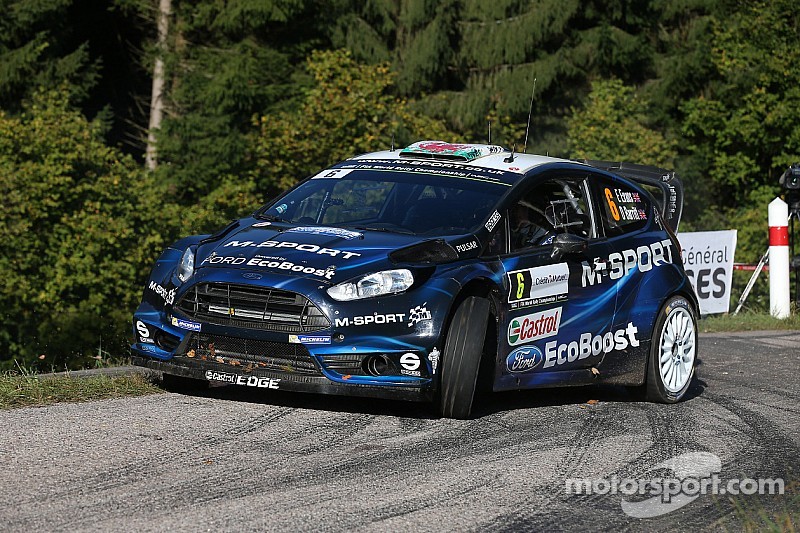 Mikko Hirvonen and Elfyn Evans were locked in their own intense battles.

As the crews travelled north for two loops of two identical stages, both Hirvonen and Evans were locked in their own intense battles – the Finn 12.9 seconds adrift of fourth position and the Welshman 12.2 seconds adrift of seventh.

In the battle for fourth, Hirvonen refused to give up the fight. Becoming more accustomed to the characteristics of Michelin’s new tyre compounds, he and co-driver Jarmo Lehtinen produced a string of consistent and competitive stage times behind the wheel of their Ford Fiesta RS WRC.

Elfyn [Evans] has been absolutely sensational all weekend, but especially today.

Although they may not have been able to catch asphalt specialist Dani Sordo, their determination and experience paid dividends – securing fifth place overall and some valuable championship points to strengthen their fourth place in the FIA World Rally Championship drivers’ standings.

In the sister M-Sport Fiesta RS WRC, Evans continued to prove his potential and is fast becoming a force to be reckoned with on asphalt. His impressive performance over the morning loop saw him take 12 seconds out of rival Mads Østberg to reduce the deficit to just two tenths of a second ahead of the final speed tests.

The Welshman was running at a comfortable pace, but when Østberg upped his speed through the second pass of ‘Forêt de La Petite Pierre’ (SS17), Evans’ racing instinct kicked in and he wasn’t going to let the Norwegian get away without a fight.

As the battle transformed into a final-stage duel for sixth place when Robert Kubica went off the road, Evans applied the pressure. Mission accomplished, he claimed the position on the opening split and topped off another highly impressive drive with an additional two points for the second fastest time through the Power Stage (SS18).

Having incurred a one minute and 40 second penalty following an electrical issue on the first day of competition, Evans and co-driver Daniel Barritt refused to let the disappointment dampen their spirits. Posting the second fastest time on each of today’s four stages the Brits are looking forward to showing further progression in the championship’s remaining two events.

Mikko Hirvonen (5th) said: “I’m quite happy with the way this weekend has gone. It would have been nice to have finished a little bit higher, but I think that the pace was really good in places. We just need a bit more consistency and to do some work with the set-up of the car so that it is better suited to the new tyres. Hopefully we can do that and take another couple of steps forward in Spain.”

Elfyn Evans (6th) said: “We’ve had a really good day today and been strong on all of the stages. It was a shame that we had the problem on Friday, but we’ve had a 100 per cent record with the car so far this year and we weren’t going to let it get us down.

“The results haven’t been our main focus this year, but I didn’t want to let Mads [Østberg] get away without a fight and it feels good to have come away with the sixth place.

“Overall I think we’ve produced a very good performance this weekend and hopefully we can build on that in Spain where it would also be nice to show some more pace on gravel as I don’t think we’ve shown our true potential on that surface just yet.”

Team Principal, Malcolm Wilson OBE, said: “Mikko [Hirvonen] has performed well on asphalt this weekend and he comes away with a strong fifth place which strengthens his fourth place in the drivers’ championship. He has shown some very good pace at times and once he has the consistency and the confidence in the new tyres then I’m sure he’ll be able to take another step forward.

“Elfyn [Evans] has been absolutely sensational all weekend, but especially today. He set the second fastest time on all four of today’s stages and proved that he certainly had the pace to be challenging for the podium. It was a shame that we had the electrical problem on Friday, but I was very impressed by the way he handled the situation.

His mental strength is second to none. He coped well with the pressure today and came away with sixth place which keeps us in the fight for second place in the manufacturers’ standings.”

Dennis Kuipers (11th) said: “This weekend has been very good for us and we have improved every day. The longer we are in the car and the more kilometres we’re doing the better it gets. That’s a good step, and it’s a pity that the rally is over now because we have really enjoyed it!”

Yuriy Protasov (16th) said: “We had a problem with the rear driveshaft for the final two stages today so unfortunately we weren’t able to continue building our speed this afternoon. But I think that we have had a good weekend. After every stage the feeling is getting better. Our pace was much better here than it had been in Germany, so let’s see in Spain if we can keep improving like this.”