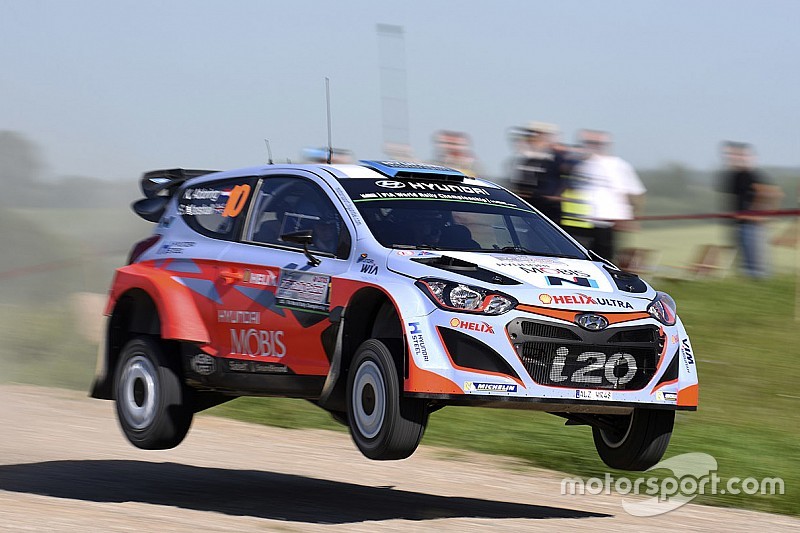 All four Hyundai Motorsport crews have made good progress on the second full day of action at Rally Poland.

Hyundai Motorsport has completed the second day of this weekend’s Rally Poland with all four Hyundai i20 WRC cars still running well. The team has sought to make progress throughout the seven stages held today, but there are still areas of the cars’ performance to improve with two stages remaining on Sunday morning.

Today’s planned itinerary of eight stages was to include two attempts at Mazury (17.70km), Wieliczki (12.87km) and Swietajno (21.25km) routes, as well as a solitary pre-lunch Paprotki stage - the longest run of the day at 23.25km. Unfortunately, the sheer number of spectators on the stage meant that SS14, the repeat run of Mazury, was cancelled, leaving just three afternoon stages for drivers to master. The day concluded once again with a Super Special Stage held at Mikolajki Arena.

Paddon and co-driver John Kennard have continued the solid performance level with which they started on Friday, extending their grasp on fifth place after another strong day of rallying.

Paddon said: “We have had another reasonably satisfying day and I think we can be pleased to be in the top five. We started off strongly this morning with two good stages but the two leading up to lunchtime service didn’t feel so good. The rhythm was missing and we lost some grip, which wasn’t ideal. I had a bit of a mental reset over lunchtime and the first stage of the afternoon went really well. The car felt good, the driving was clean and the time was decent. The penultimate stage of the day was tougher. We ran two hard tyres on the front and I nearly came off the road a few times as a result of some understeer at the beginning. Despite that, there are lots of positives to take from today and we now aim to defend our fifth place tomorrow.”

Neuville started the day in positive fashion by moving up one place on the overall classification to sixth place. A measured drive by the Belgian for the rest of the day ensured he retained that position heading into the rally’s final two stages on Sunday morning.

Neuville commented: “I think we have to be pleased with the way our day has gone. We used the morning stages to manage ourselves a bit, checking the pace notes and just making sure we kept Robert behind. We had no real dramas. After lunchtime service, we knew that tyre choice would be important with the increasing temperatures and the improving grip levels. Of course, SS14 was cancelled but with the soft tyres in SS15 things worked well and we were pleased with the time. Unfortunately, the next stage was not as easy, the car was moving around a lot and we couldn’t do more. However, we are in the top six, which is good for the Championship. Our target for tomorrow is to retain this position and finish the rally cleanly.”

Sordo has pushed hard today to find improvements in the #8 Hyundai i20 WRC. He remains inside the top ten and will use tomorrow’s final stages to understand more about the behaviour of the car in these tricky Polish stages.

Sordo said: “It’s been another day of trying to build confidence with the car and to find improvements. The opening stages of the day went OK and I felt sufficiently comfortable to push a bit in the third one of the morning. I wasn’t able to maintain that into the final stage, and I lost some time, but after lunchtime service we approached the loop with renewed motivation. I couldn’t have done any better in the first afternoon stage but in SS16, we were on the wrong tyres - the softer ones - which combined with a lot of dust made life very difficult. We are trying new things on the car and we’ll use tomorrow to hopefully find out more information for the future.”

For Abbring, it has been another valuable day of learning as he continues to acclimatise to the #10 Hyundai i20 WRC in the competitive rally environment. The Dutchman has built his confidence levels stage by stage and will now look to complete his second WRC event with Hyundai Mobis World Rally Team tomorrow.

Abbring said: “It’s been another great day and we have made a lot of progress despite some problems here and there. We started the morning well. The car felt much better, both in terms of traction and balance, and I immediately felt more confident. Unfortunately, in the penultimate morning stage (SS12), we landed in a bush after a crest and had to slow down because the water temperature was high. Then, in the final stage pre-service, we got stuck in a left corner which lost us over three minutes of time. The afternoon went OK. We had soft tyres and the conditions were better than I expected. All in all, I’m happy. We’ve tried some things on the car that work for me, personally, and this is very positive for the future.”

For the Hyundai Motorsport team to still have four cars running solidly after two highly competitive and challenging days at Rally Poland is a great achievement, particularly with two cars in the top six. However, the team never settles for less than its full potential, so will look to make more improvements in performance on Sunday morning.

Team Principal Michel Nandan said: “We can be happy to conclude the penultimate day of this difficult rally with all four cars still running. The day has not been without its troubles but on the whole, we have seen some good pace from the Hyundai i20 WRCs and encouraging progress from all four driver crews. Of course, we are never happy until we know we have met our potential so we will be analysing today’s stages to see what we can do for tomorrow, the final day. With Hayden and Thierry both battling well in the top six, and Dani and Kevin also hoping to make improvements, we will keep pushing right to the end.”

Sunday will see the 14.60km Baranowo stage run twice, the second being the Power Stage. Despite just 29.20km stage kilometres separating teams and drivers from the end of the rally, these complicated Polish stages will still demand utmost respect and attention.